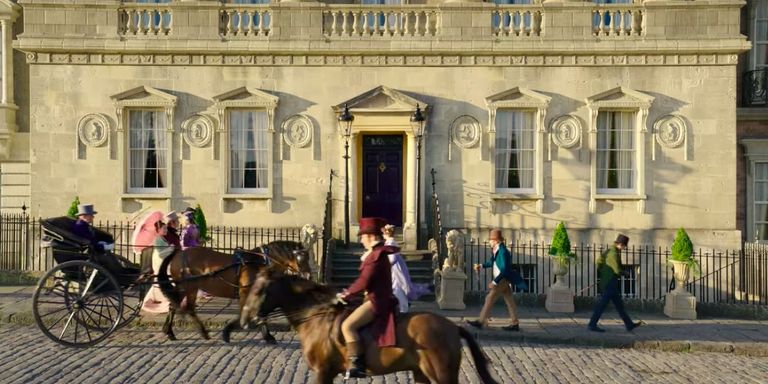 Embark on a journey from London to Bath, exploring the iconic filming locations from Netflix's hit show Bridgerton.

Embark on a journey from London to Bath, exploring the iconic filming locations from Netflix's hit show Bridgerton. This itinerary is perfect for the period-drama aficionado as a plethora of adored period series, including Downtown Abbey, shared filming locations with Bridgerton. During this holiday, you will also learn a lot about the history of the British monarchy as well as visit iconic castles and beautifully manicured gardens.

PHOTO BY LIAM DANIEL FOR NETFLIX.

Commence your Bridgerton journey by exploring England’s capital city. London is one of the most exhilarating and diverse cities in the world. This thriving metropolis has a rich history evident at every street corner and yet it continues to innovate, reinvent itself and lead the world.

The exterior of the Bridgeton family home is in fact Ranger’s House. Ranger’s House is an elegant Georgian villa on the boundary of Greenwich Park and Blackheath which houses The Wernher Collection, a world-class art collection amassed by the 19th-century businessman, Sir Julius Wernher.

One of the most extravagant homes on the show is of course, the Duke of Hastings’ lifelong residence where he and Daphne move in together after their wedding. This was filmed in different locations, including Syon House. Syon is one of the last great houses of London, and has been in the family of the present owners for more than 400 years. Profoundly historic, the House holds a wealth of art within its grand classical interiors, while the Park and Gardens feel like deep countryside, although barely nine miles from Charing Cross.

Those in search of visiting the lavish interior scenes of Queen Charlotte’s home should venture to Lancaster House. Just around the corner from St. James’ Palace, Lancaster House is a neo-classical mansion that was commissioned by the Duke of York in 1825. It’s rarely open to the public, but does sometimes open its doors at the annual Open City event. Beyond Bridgerton, it was also a location in UK period drama Downton Abbey.

Speaking of the Queen, when in London, partake in a truly extraordinary experience. The Crown Jewels have a special significance in British public life, making them one of the nation’s most popular tourist attractions. You will venture to the Tower of London to experience a private morning jewel house tour. On this special morning tour, the Duty Exhibitor and the expert warders will welcome you to the treasury and guide you through the Crown Jewels exhibition before it opens to the general public.

Other sights to visit in London where Bridgeton filmed include Wilton House and Badminton House. 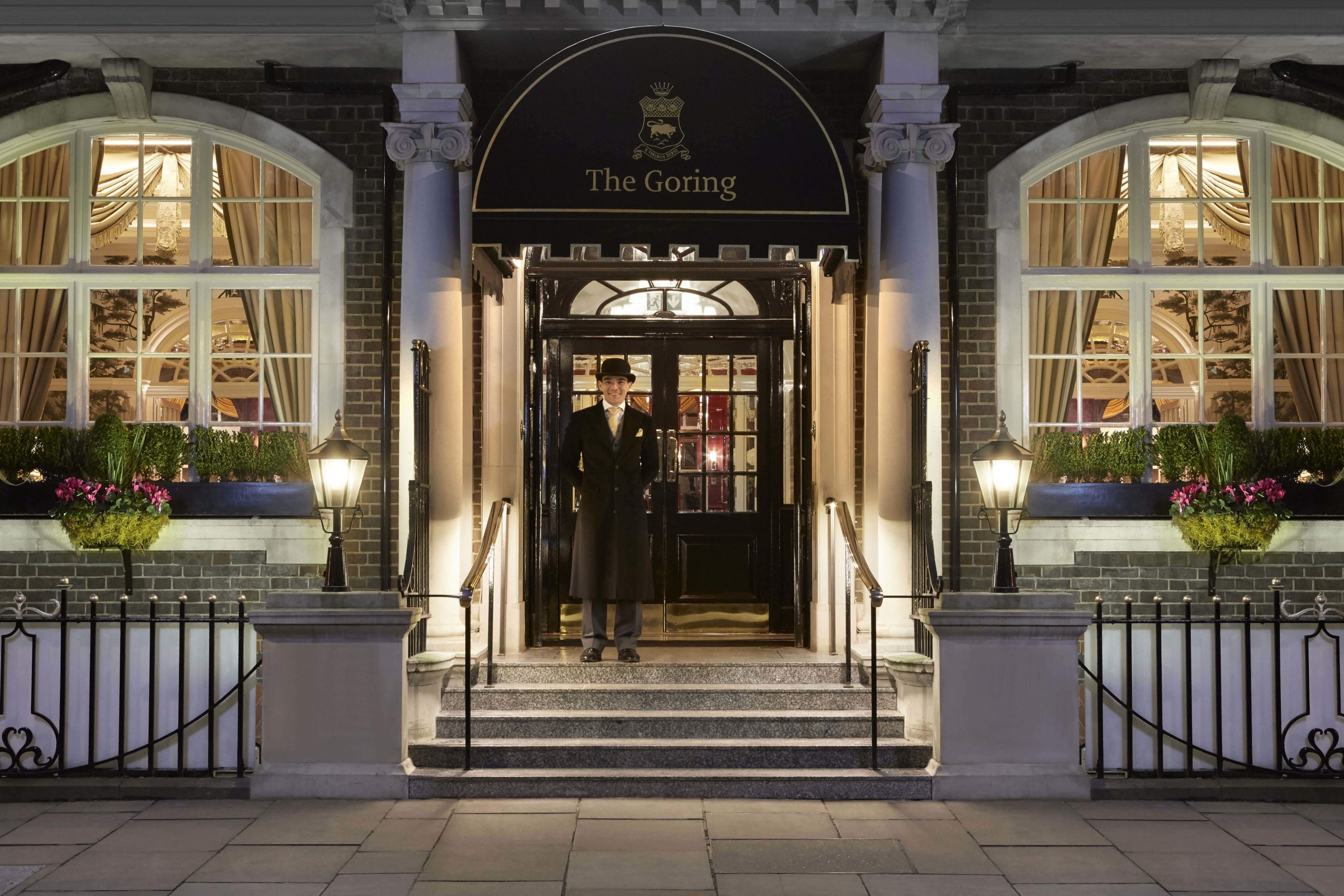 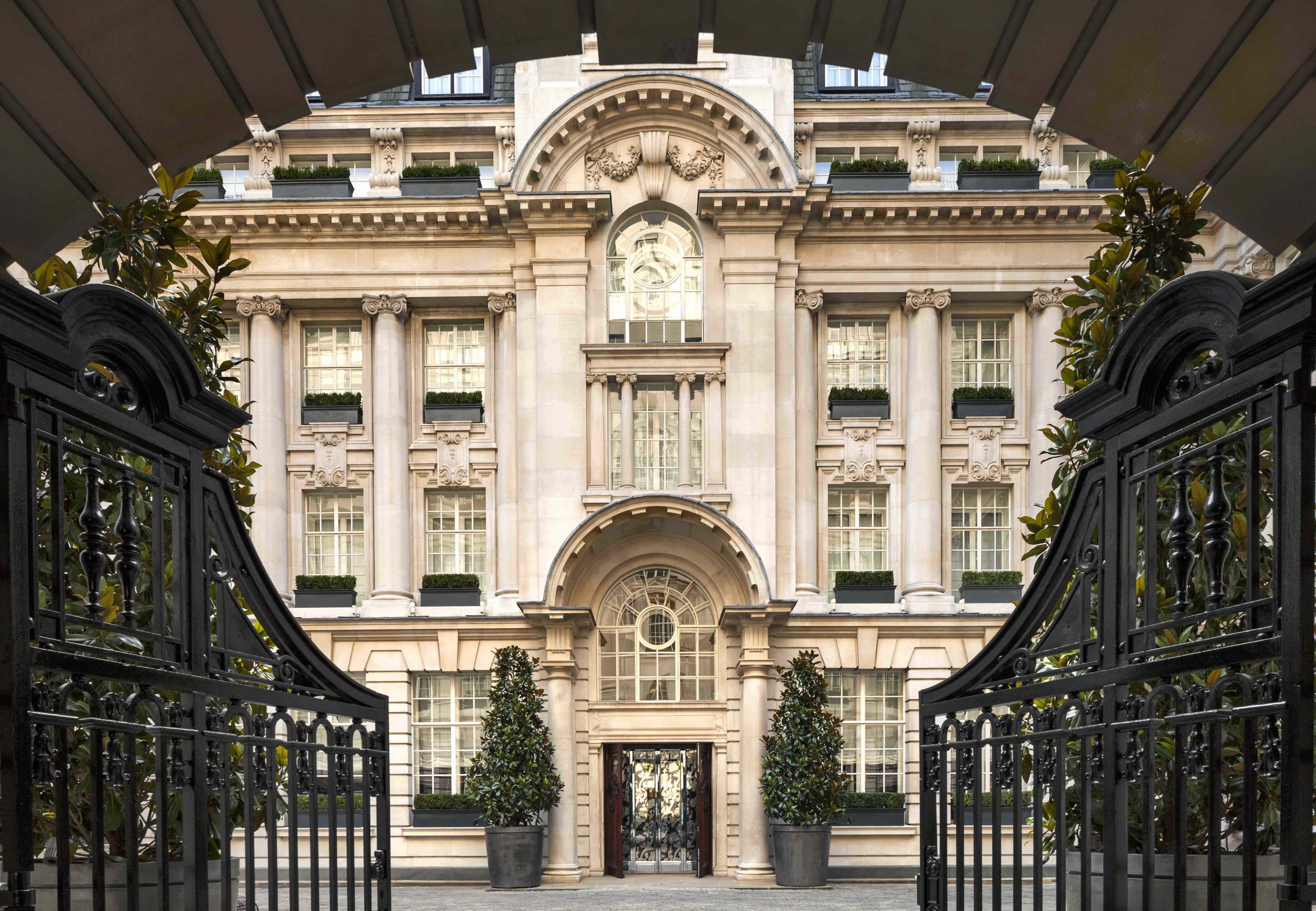 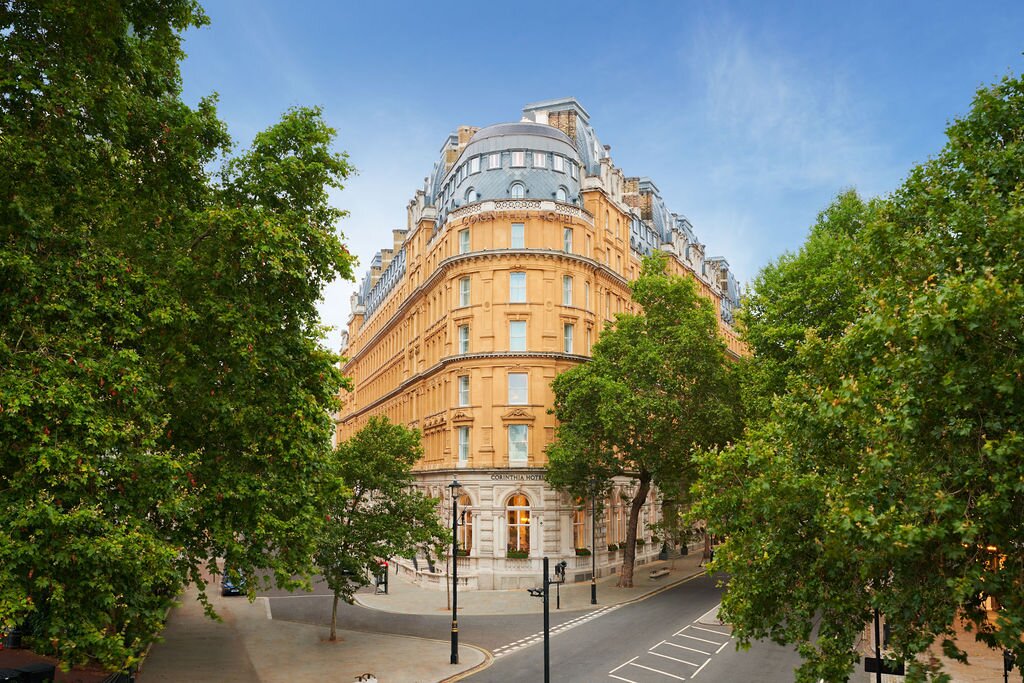 Impeccably English and perfectly individual, The Goring features 69 sumptuous rooms and suites, each uniquely decorated with the ?nest furnishings. As the last remaining family-owned luxury hotel in London, it’s renowned for its warm, intimate atmosphere and personalised service.

Located in Belgravia – one of the most exclusive and elegant areas in central London – it’s perfectly placed for the spectacular London sights. The iconic walls of Buckingham Palace border the district and nearby Knightsbridge, Mayfair and Sloane Street make for a fashionable stay.

The hotel’s suites offer true indulgence. Guests can choose between Junior Suites and Belgravia One and Two-bedroom Suites. The jewel in the crown is The Royal Suite– an exceptional suite with two bedrooms and two and a half bathrooms. The glorious suite spans the length of the building and has a balcony overlooking The Goring Gardens. Families love The Goring and can choose to stay in connecting rooms or a two-bedroom suite.

Rosewood London embraces guests within one of London’s most historic locales. The central location, moments from Covent Garden, near an eclectic arcade of ultra-luxury boutiques on Lamb’s Conduit Street, the British Museum, Theatreland and the Royal Opera House.
Greeted by doormen in tweed caps enter through wrought iron gates, into the peaceful courtyard giving a sense of arrival more akin to a private manor house than a hotel. Rosewood London was also voted “Hotel of the Year 2014” AT Virtuoso Best of the Best Awards.

Rosewood London is an ultra-luxury High Holborn hotel that combines English heritage with contemporary sophistication in a central location. Set in the heart of the city near Covent Garden, the City and West End theatres, it is an ideal base for business and sightseeing in London.

Rosewood London is a grade II-listed 1914 building with wrought-iron gates and an original carriageway leading to the inner courtyard. Located close to Covent Garden, Theatreland, the British Museum and the Royal Opera House, its 262 rooms and 44 suites are among the city’s largest; the six-bedroom Grand Manor House Wing has its own entrance and postcode. Its 262 guestrooms and 44 generously appointed suites, created by renowned New York-based Tony Chi and Associates, are inspired by a traditional British manor house and evoke that of a true London residence. Rooms are designed to provide a series of discoveries to surprise, please and amuse guests.

The Rosewood London is simply one of the finest hotels in the world, with every moment of your stay made special by the fantastic facilities & outstanding service.

Rated among the city’s finest, Corinthia London combines grandeur and heritage with modern freshness. Corinthia Hotel is a destination in itself featuring seven penthouses, two world-class restaraunts, and the award winning ESPA Life at Corinthia Spa. The hotel boasts vast lobbies, high ceilings, and lots of natural light combined with cutting-edge design that creates unforgettable spaces. Corintihia Hotel’s 295 rooms, suites, and penthouses blend luxurious decor of the hotel’s 1885 character with state of the art amenities.
London has gained a distinguished new landmark in the form of a graceful and historic luxury hotel. Perfectly positioned in the heart of London, Corinthia Hotel is just steps from Trafalgar Sqaure, Embankment, Westminster and Covent Garden, and a few minutes from Mayfair Village. Situated on the River Thames, Corinthia Hotel is the perfect location for clients wanting to explore London’s city centre.

You will then visit Painshill. We see the Featherington family, led by matriarch Portia, at their leisure in the gardens of Painshill Park. Painshill near Cobham, Surrey, England, is one of the finest remaining examples of an 18th-century English landscape park.

While in this area, be sure to visit Windsor Castle. Windsor Castle is still very much a working castle, and is the favourite home of Her Majesty the Queen. The magnificent state rooms provide an overview of architectural and interior design over the centuries and there is no shortage of stories about the characters who once filled these rooms. Windsor town is also a perfect place for some souvenir shopping. 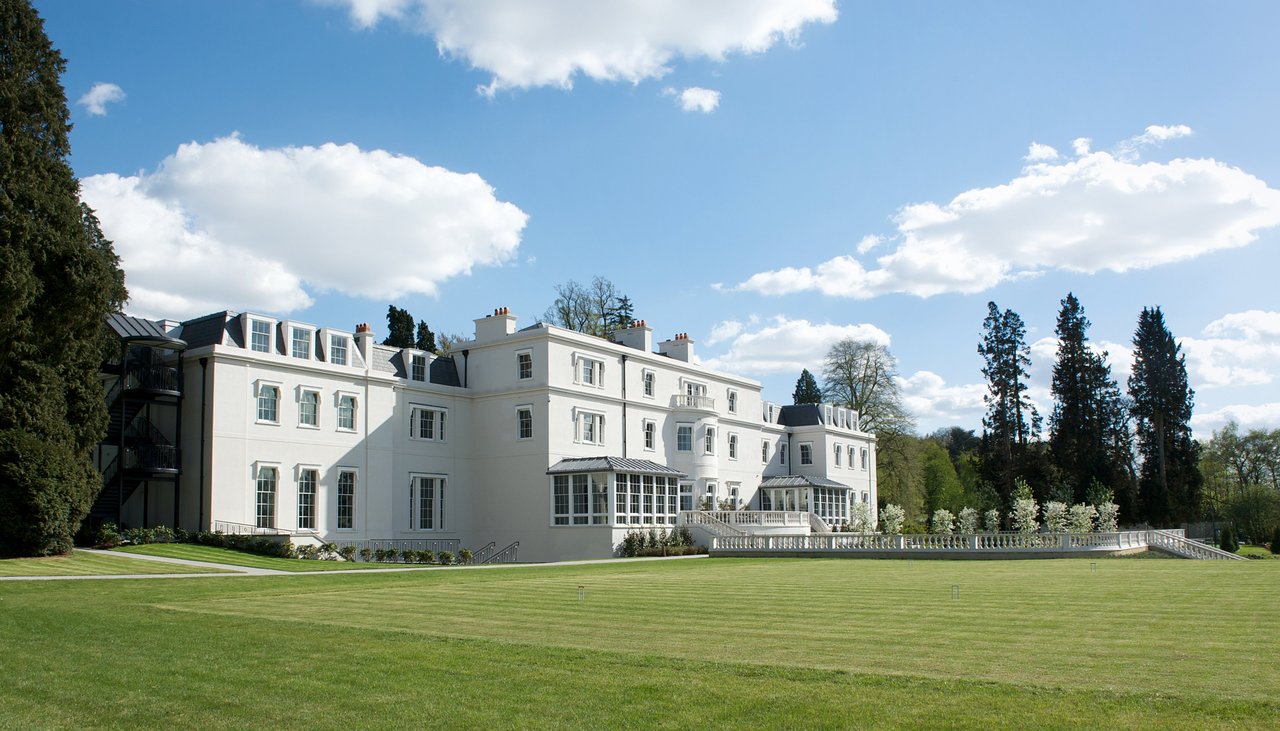 Coworth Park is a 70-room luxury house hotel and spa set in 240 acres of picturesque Berkshire Parkland. The estate includes an indoor pool and three restaurants, an equestrian center and kids club. The only UK hotel to feature its own polo fields.

Coworth Park is located next to Windsor Great Park, near Ascot. The closest rail way stations are Ascot, Virginia Water and Sunningdale while London is just a 45-minute journey by car.

Coworth Park sits in 240 acres of meadow, which, in summer, offer up a hazy carpet of yellow, lavender and pink wild flowers. Coworth Park has its sybaritic spa, fragrant gardens, polo fields and stables. There are 30 main rooms in the central mansion house, and a further 40 rooms split across cottages and stables.

Next you’ll head over to the heart of Bath, a historic city that dates back to Roman England and which now proudly boasts UNESCO World Heritage Site status. Here you’ll stay in Bath’s iconic Georgian Royal Crescent, the perfect location from which to explore the treasures of the city such as the Roman baths, its indulgent foodie scene, and its distinctive architecture.

Most of the filming of Bridgerton transpired in Bath. You will in fact be lodging at the Royal Crescent Hotel, which appears numerous times in the popular show.

The Holburne Museum of Art acts as Lady Danbury’s residence. The Holburne Museum is located in Sydney Pleasure Gardens, Bath, Somerset, England. The city’s first public art gallery, the Grade I listed building, is home to fine and decorative arts built around the collection of Sir William Holburne.

Elsewhere, Trim Street, Beauford Square and Barton Street were given a makeover to turn them into cobbled streets, and more filming took place in the period-perfect Abbey Green, with its famous ancient plane tree.

The Royal Crescent Hotel & Spa is a five-star haven of elegance and tranquillity in the historic centre of Bath, occupying the two central buildings of the world’s finest crescent.
Beyond its magnificent facade lies a hotel renowned for its charm, elegance and superb service, and, the unexpected beauty of the beautiful one-acre, landscaped garden leading to the skilfully converted coach houses, which now accommodate the award-winning Dower House restaurant and The Spa. This iconic hotel is far more than a remarkable collection of buildings and beautiful gardens. It offers the opportunity to experience a style of gracious living from the age when Bath was the very centre of the civilized world.
With a prestigious history that spans more than 250 years, The royal Crescent is one of the only landmark buildings in the world you can sleep in.