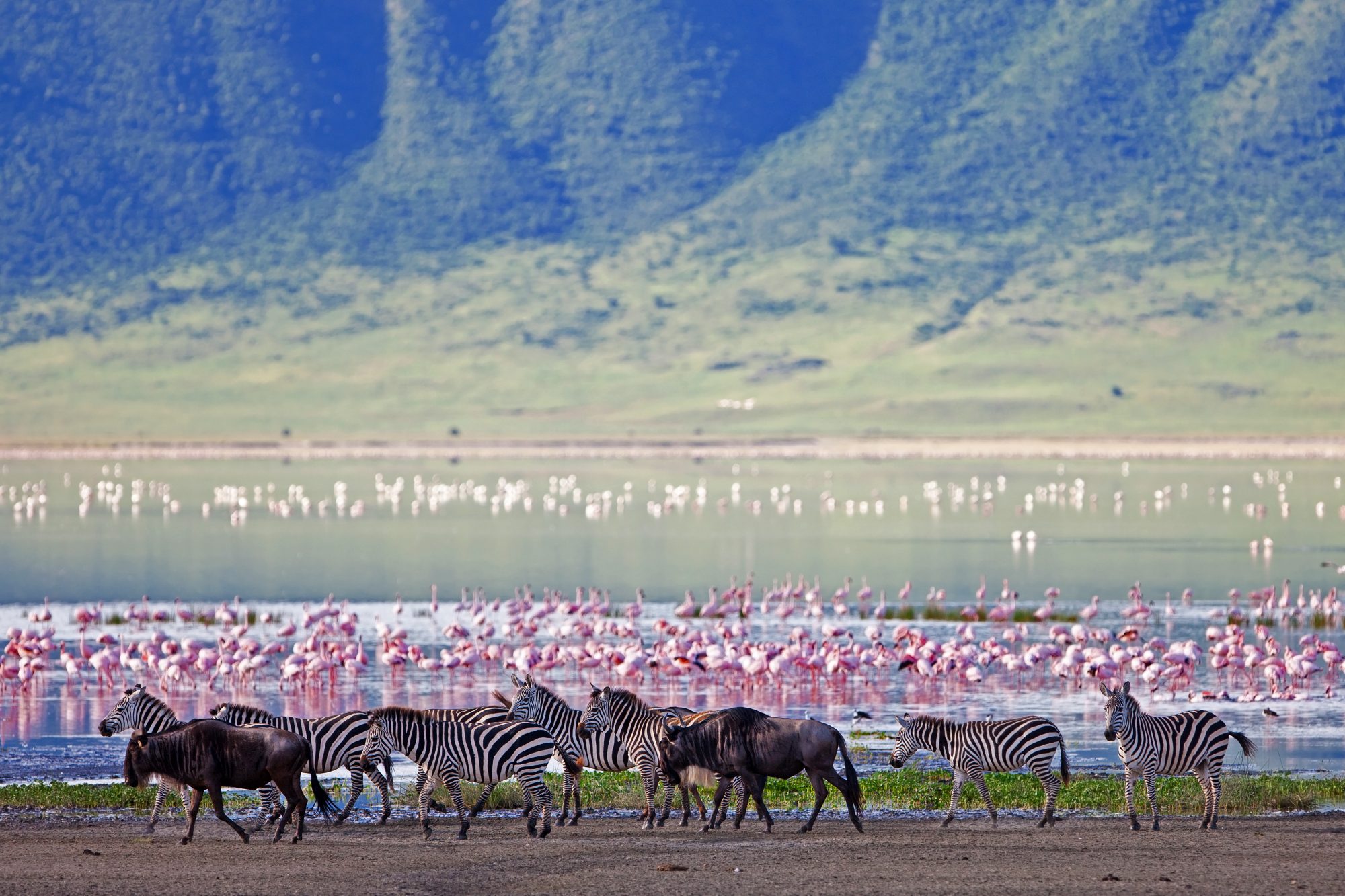 From the Mara to the Ngorongoro Crater, experience the best of Kenya and Tanzania on this adventure-packed itinerary.

This 12-day safari gives you the opportunity to truly experience best of East Africa. Take in astounding views of snow-capped Mount Kenya in the Laikipia region; track large herds of wildlife in the Masai Mara; witness the dramatic river crossings by the Grumeti River; and photograph the remarkable Ngorongoro Crater.

Days are spent on game drives getting up close to Africa’s predators and vast herds of zebra, wildebeest and buck. At night, you will swap safari stories around the fire while enjoying gourmet dishes under a starry sky.

Arrive in Nairobi. Situated in along the Nairobi River in beautiful Kenya, the capital of Nairobi is East Africa’s most cosmopolitan city. It serves as an excellent starting point for African safari trips around Kenya. Nairobi is Africa’s 4th largest city and is a vibrant and exciting place, and although it has developed a reputation which keeps tourist visits brief, there are some fascinating attractions: its cafe culture, unbridled nightlife, the National Museum, the Karen Blixen Museum and most notably just 20 minutes from the city centre wild lions and buffalo roam in the world’s only urban game reserve. Make sure you pay a visit to the elephant orphanage operated by the David Sheldrick Wildlife Trust.

Venture to Laikipia. Sandwiched between Mount Kenya and the northern deserts, Laikipia is where Kenya’s wild and semi-arid northern frontier country begins. The region is made up of privately owned and community ranches centred around the Laikipia National Reserve. Known as one of Kenya’s best safari areas, the high plains of Laikipia feature vast open stretches of African savanna scattered with abundant game including: Grevy’s zebras, black rhino, lion, leopard, wild dogs, buffalo and thousands of elephants. Visitors can enjoy a luxury safari experience at a private lodge or stay in the worthwhile community-run lodges which support the local Samburu and Ilaikipiak and Mokogodo Maasai communities. 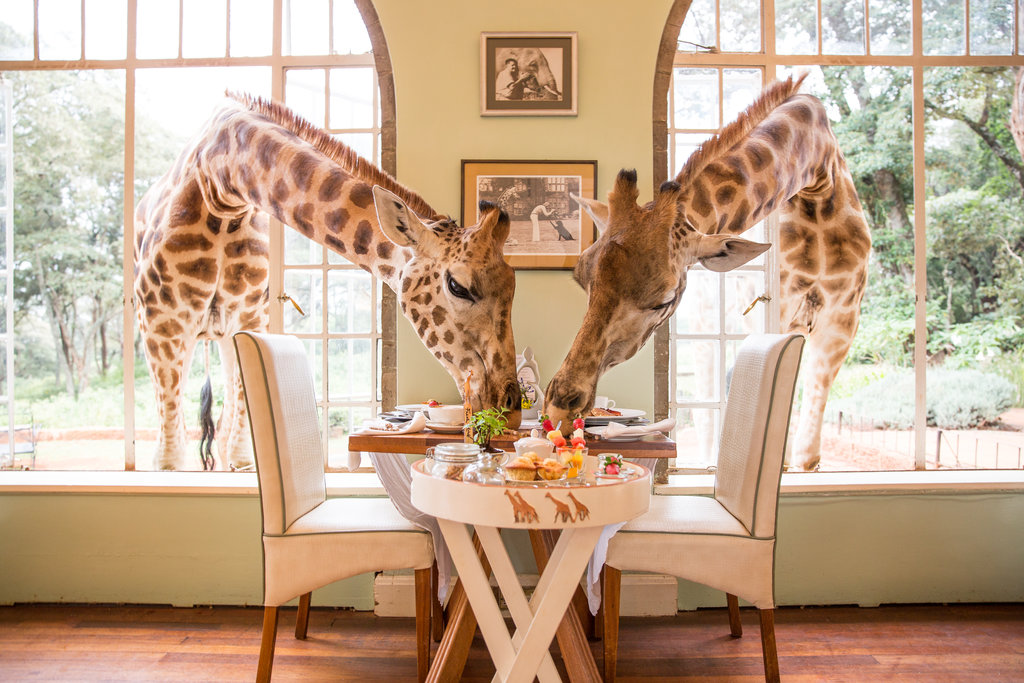 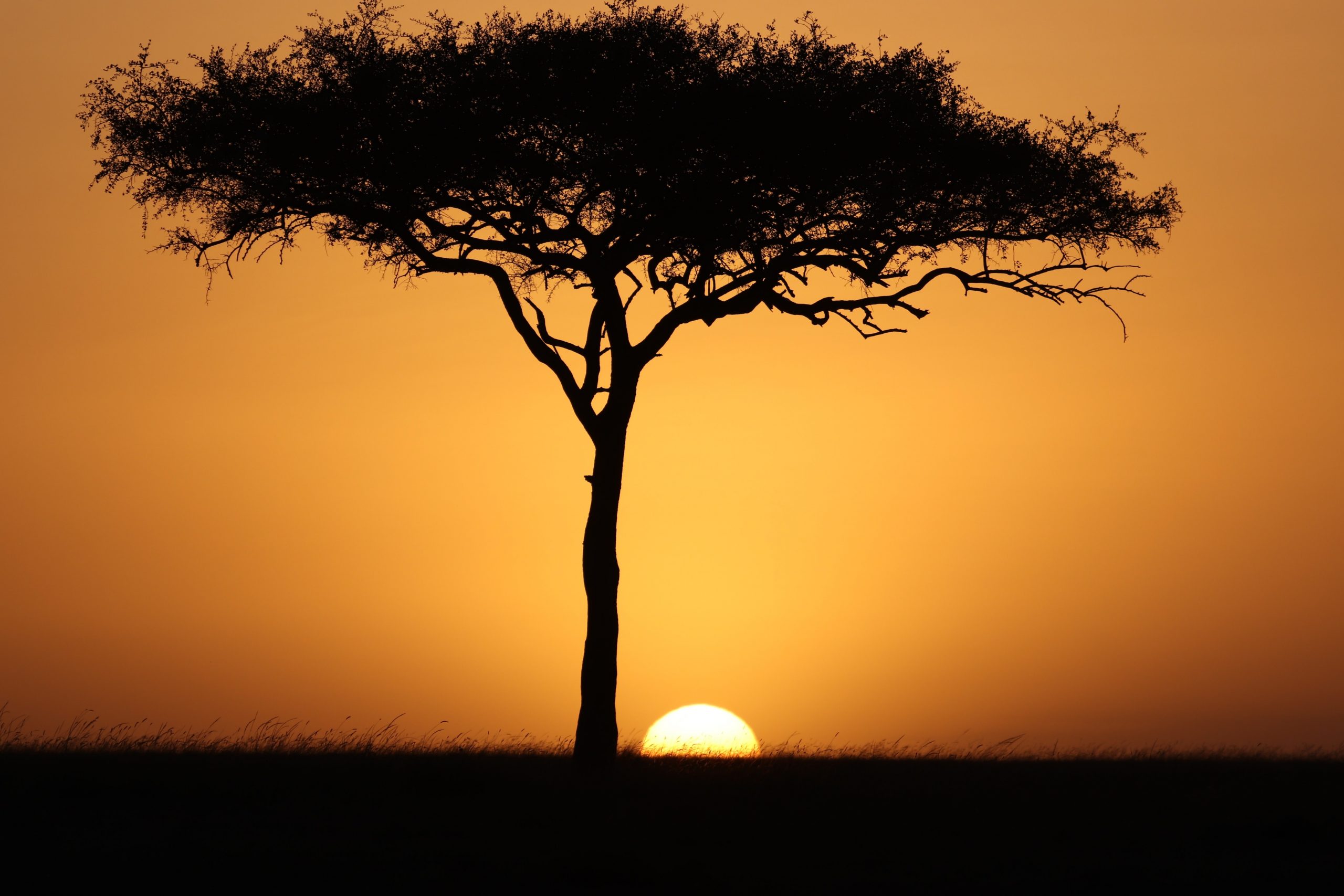 Giraffe Manor is a peaceful retreat to start or end a safari in East Africa and has become an icon of Nairobi’s historical landscape.

Located in the leafy suburbs of Langata on a 140 acre sanctuary, Giraffe Manor offers a unique opportunity to meet the resident giraffe, all of whom are of the endangered Rothschild’s species.

Close up encounters with the semi-habituated giraffe as they put their heads through the windows at breakfast creates an unforgettable memory for guests. The inquisitive giraffe are always keen to be hand fed!

The Garden Manor is the newer part of Giraffe Manor built in 2011. The Garden Manor was created to provide accommodation exclusively for guests of our collection, so that the main house can be kept as open and accessible to all. Our resident giraffes regularly enjoy visiting both parts of the manor for treats. This means that you can book the Garden Manor if you are also booking another one of our properties for the same group.

Situated in the heart of Kenya, the Fairmont Norfolk Hotel offers a sophisticated retreat that is within easy reach of world-renowned wildlife centres, golf courses, and museums. The luxurious rooms and suites are tastefully furnished and include en-suite bathrooms, armchairs, work desks, and plasma screen TVs. The hotel offers four dining establishments featuring a variety of cuisines, as well as an all-day dining restaurant. Guests can enjoy leisurely walks through the tropical gardens, have a splash in the pool, work out at the fitness centre, or enjoy relaxing massages and treatments at the spa.

Make your way to the Mara. One of Kenya’s undisputed natural highlights is the Masai Mara National Reserve, which sprawls across more than 1500 square kilometres of the country’s southwest. The park protects a phenomenal array of game, including charismatic species such as elephant, lion, leopard and buffalo, as well as crocodile and hippopotamus in the Mara River. The birdlife is no less impressive, with over 450 resident bird species. However, the true highlight here is the Great Migration, recognised as one of the Seven New Wonders of the World. To survive the dry months of July to September, some 1.7 million wildebeest, migrate from the parched plains of the Serengeti National Park in Tanzania. Along with much smaller numbers of antelope buffalo and zebra, they move to the more forgiving grasslands of the Masai Mara. In their wake come predators such as lion, hyena and cheetah, for whom these giant herds are an easy source of prey. 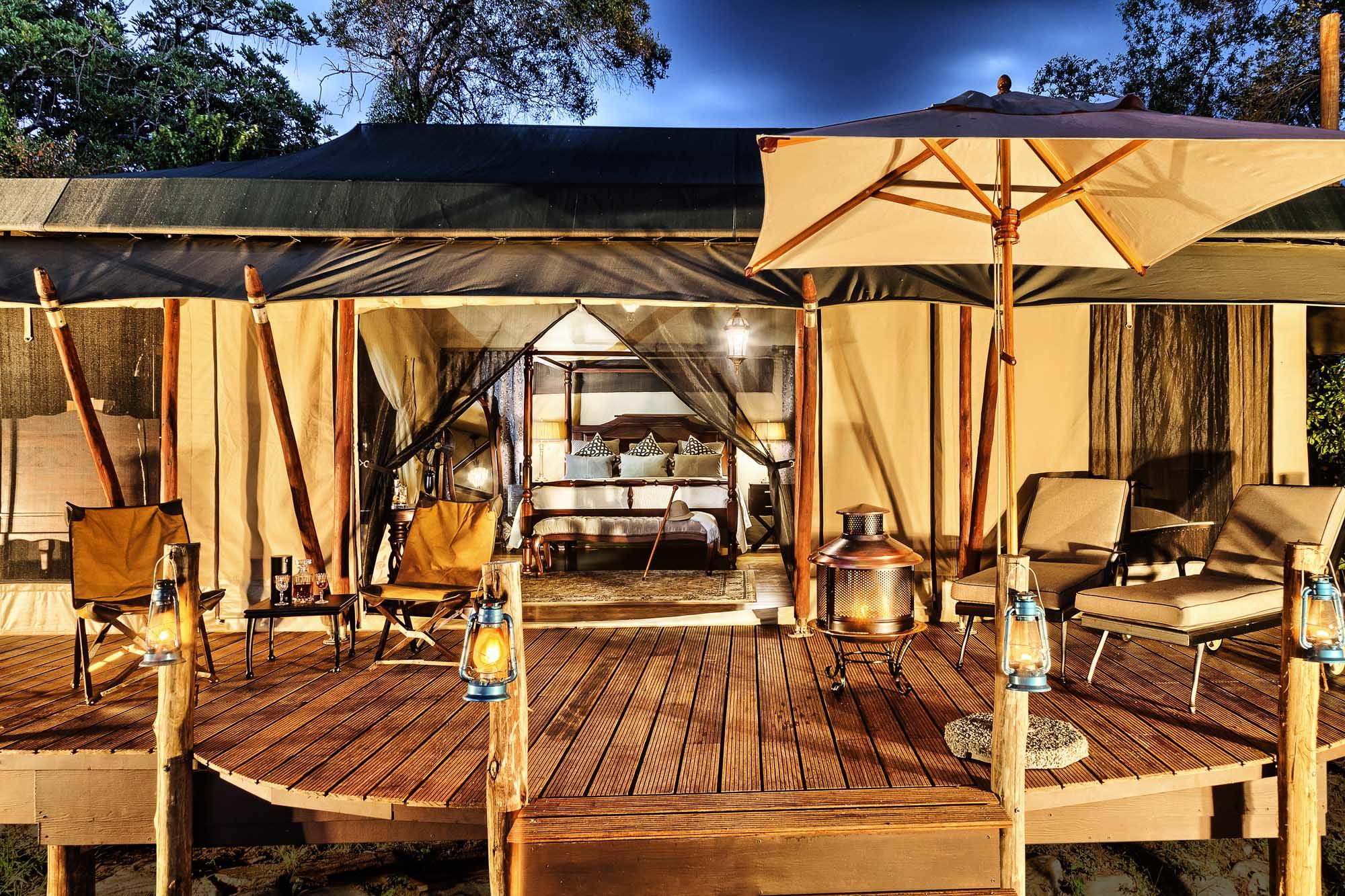 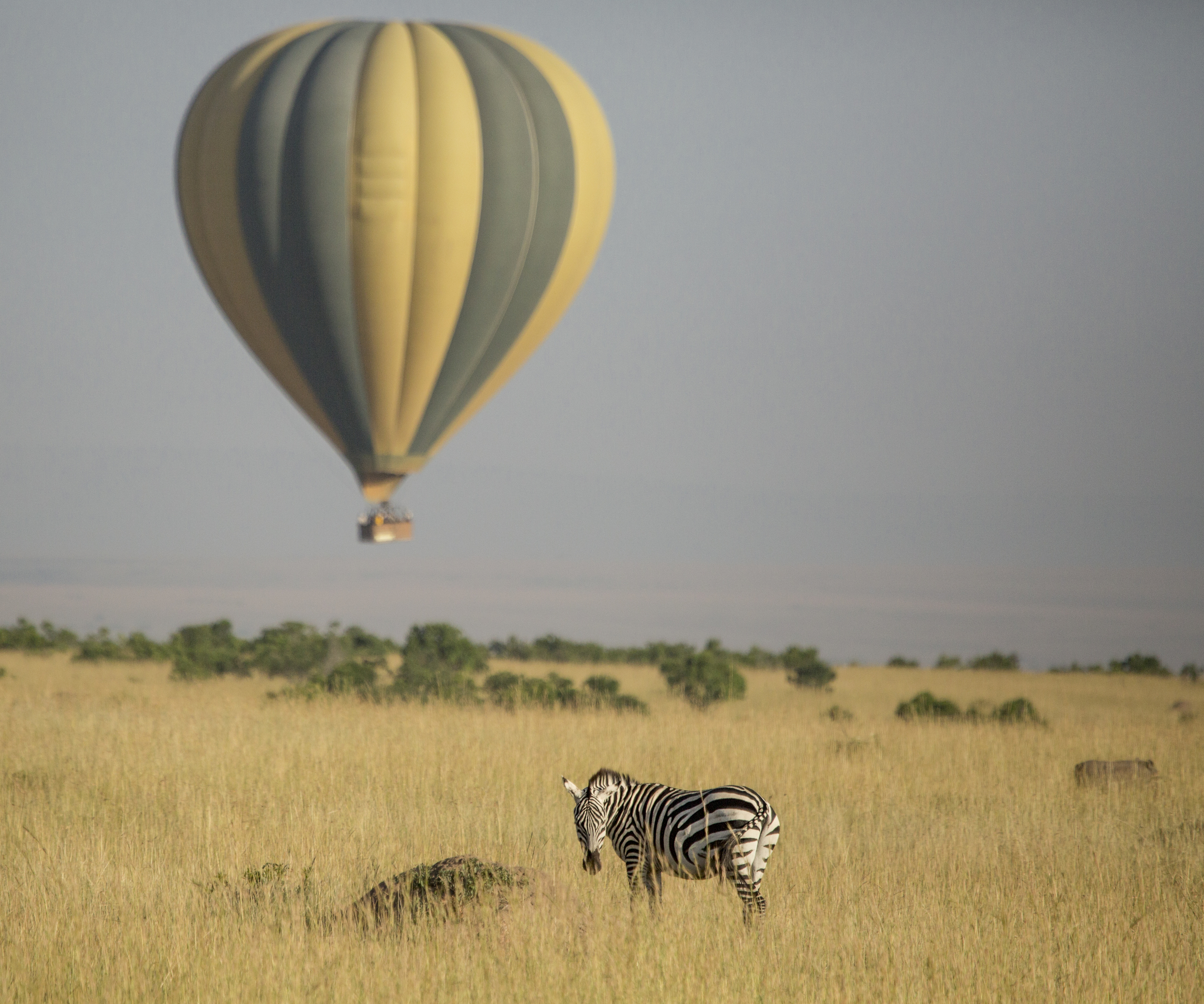 Elewana Sand River Masai Mara has 16 luxury tented accommodations divided into two separate but adjoining campsites of 10 and 6 tents. Each “camp” possesses its own designated dining and public areas, thereby creating an increased sense of exclusivity and privacy.

The interior fixtures and furnishings mirror this period perfectly, reminding all who visit of those countless Hollywood movies that have paid homage to a classic era of African adventure.

Sala’s Camp offers space, comfort and great views as well as an amazing safari experience. We can accommodate up to 20 guests in seven new luxury tents dotted along the Sand River. Sala’s guests are treated to the casual elegance of safari days gone by whilst being surrounded by contemporary touches like private plunge pools and glass-fronted tents. The camp’s interiors are elegant and comfortable and all rooms have en-suite bathrooms with bathtub and shower, running water and flushing toilets. Our electricity is solar-powered and there is a standby generator for refrigeration and charging devices. Typically, after a day’s excursion, return to relax in your hammock or meet up for sundowners by the campfire before enjoying dinner served under the stars.

Sala’s Camp prides itself on its hospitality and all arrangements are made with meticulous care. Guests enjoy full-board during their stay, which includes all meals and most drinks, excluding champagne and specially imported wines and spirits. There are activities on offer for children of all ages and babysitting is available. The camp is also suitable for guests with limited disabilities and special meals can be catered for by prior arrangement.

Depart Kenya for Tanzania. Venture to Singita Serengeti Grumeti. Singita Grumeti is located adjacent to the Western Corridor of the Serengeti, bordering the national park, and encompasses 400,000 acres of unrivalled wilderness. Wide river valleys meandering through the plains, grasslands, woodland and forest. The area forms part of the famous migratory route, which is travelled by hundreds of thousands of animals every year. Grumeti features unparalleled exclusivity combined with the ability to enjoy a wide selection of activities not allowed inside the Serengeti as it not governed by national park regulations. The famous Great Migration, an annual trek of 2 million animals through the Serengeti-Mara ecosystem, bisects our reserve annually. Called The Greatest Wildlife Show on Earth it has, since time immemorial, been the dramatic backbone of this enormous wilderness. 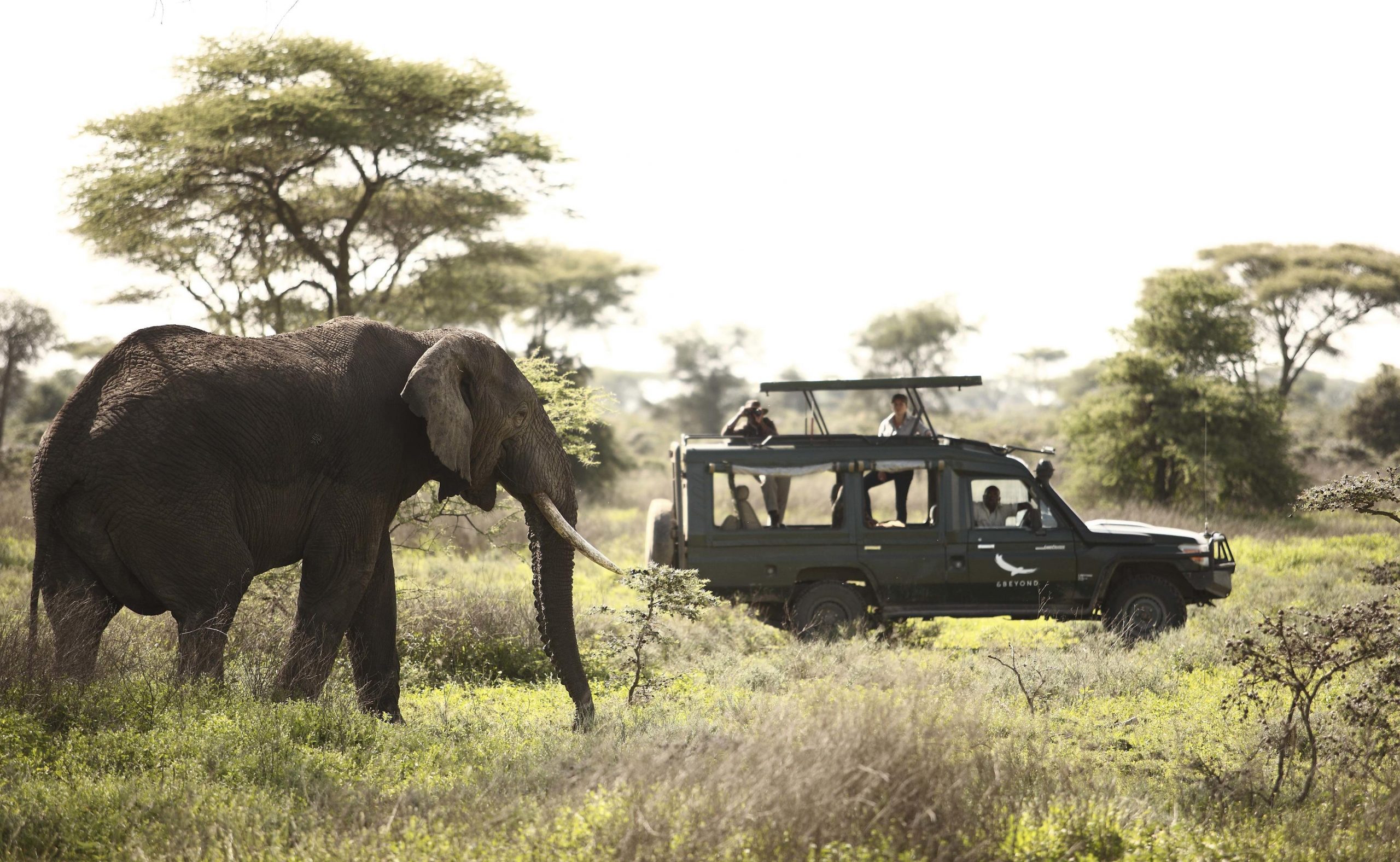 Inspired by Tanzania’s annual Great Migration, andBeyond Grumeti Serengeti Tented Camp is situated near one of the most famous fording points used by the wildebeest as the cross the Grumeti River in an area that is home to exceptional yearround resident wildlife. Rustic yet sophisticated, the intimate tents combine hues of natural grey with accents of natural stone and bone. All ten of the tented suites look out onto the Grumeti River and its resident pods of hippo, while sliding doors open out onto shaded private decks. Stone shower towers are open to the sun and stars. Two of the tents have been designed to cater for families travelling together and share and an enclosed entrance lobby that can allows easy access between the tents while maintaining complete privacy. A dramatic boma is the setting for open-air dinners with delicious food prepared in traditional stone ovens. A rim-flow swimming pool looks out onto the banks of the river.

Leave the Serengeti behind, as you make your way to the famous Ngorongoro Crater. Situated in the Crater Highlands in Northern Tanzania, the Ngorongoro Conservation Area is best known for its archaeological and geological significance, rich wildlife, and beautiful scenery. The conservation area encompasses the famous Crater, the renowned Olduvai Gorge and vast plains of grasslands, forests and mountains extending to the Serengeti. This 8000-square-kilometre protected area is recognised for its natural beauty and has been placed on the UNESCO World Heritage List. Visitors flock here to soak up the spectacular views of the Ngorongoro Crater, voted as one of the Seven Natural Wonders of Africa, it is famed for its natural beauty and abundant wildlife. Popular activities include: mountain biking, hiking, game drives, bush walks, and visiting a local Maasai village. 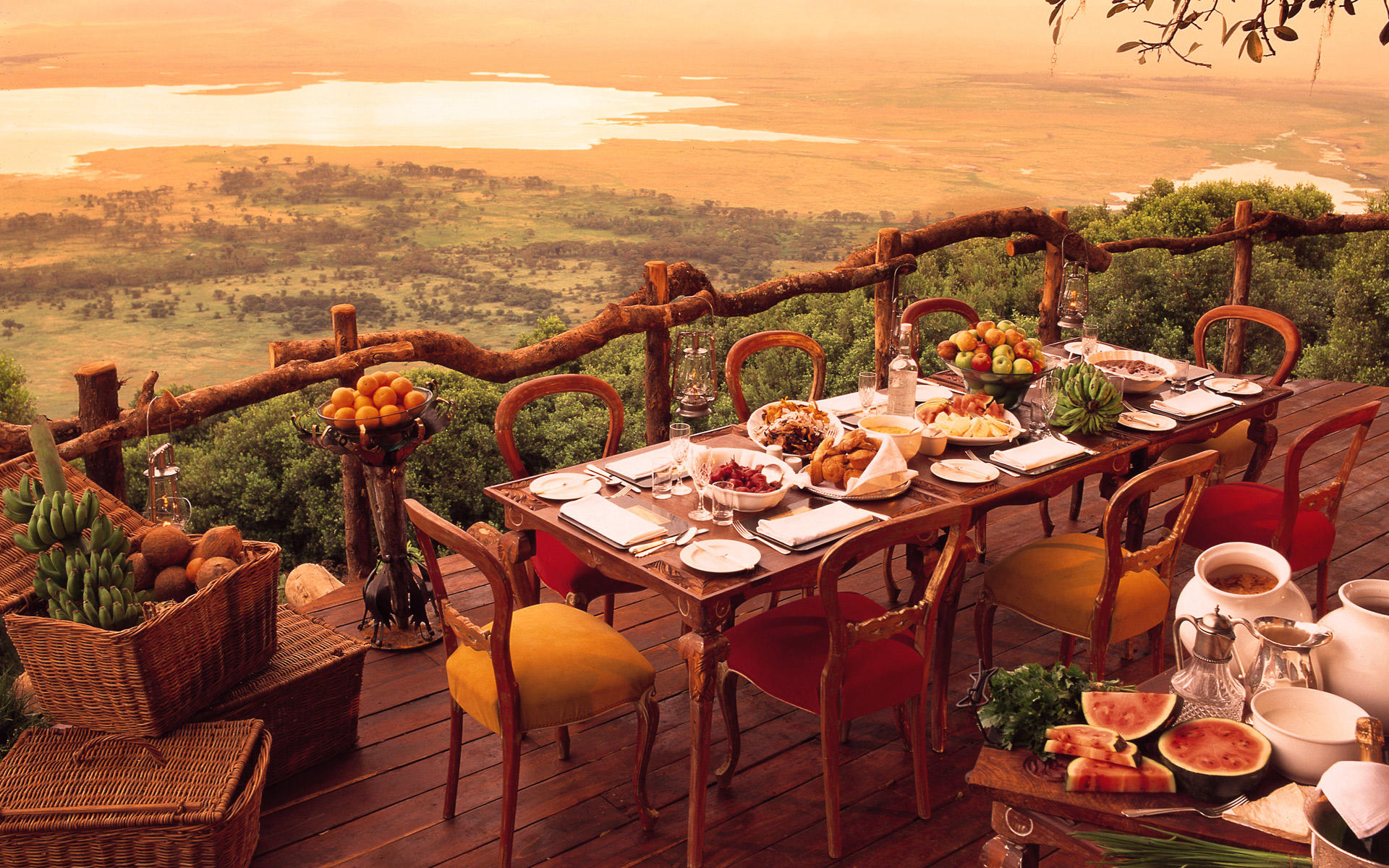 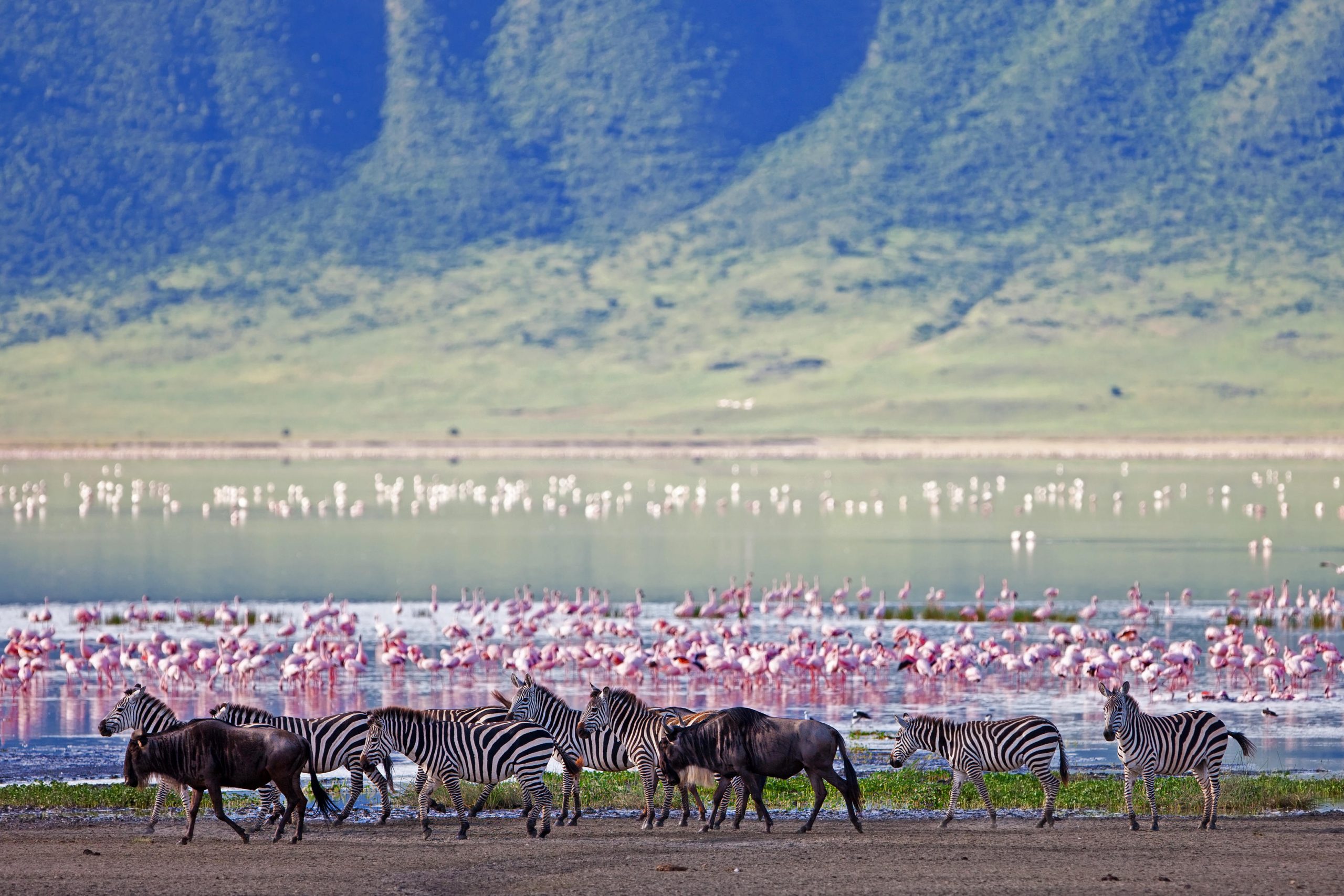 Perched on the edge of the Crater rim, andBeyond Ngorongoro Crater Lodge’s sumptuous safari suites present breath-taking views. Inspired in design by the Maasai mud and stick manyatta (homestead), this is without doubt one of the most architecturally spectacular safari lodges in Africa. Three separate and intimate camps are reminiscent of a bygone era totalling just 30 suites in all. Steeped in romance, each stilted, handcrafted mud and thatch suite is adorned with graceful antiques and grand chandeliers. The bedroom, sitting room and ensuite bathroom boast floor-to-ceiling glass windows, overlooking the magnificent Crater below. Ensuite bathrooms, with a centerpiece of red roses, feature huge showers and chandelier-lit bathtubs. Personal butlers discreetly tend to guests’ every need, bringing tea in bed, stoking fireplaces and drawing luxurious baths. Described as “Maasai meets Versailles”, each camp has its own guest sitting and dining areas and viewing decks. The domed dining room, with its grand fireplace, turns every meal into a special occasion.

Sanctuary Ngorongoro Crater Camp comprises ten luxury safari room tents – each with its own ensuite bathroom and indoor bucket shower. The room tents also feature hairdryers, plug points and a small sitting area in front of each of the tents. The three large and comfortable communal tents provide a dining area where scrumptious meals are served, a lounge area perfect for afternoon relaxation, and lounge bar where pre-dinner drinks are served. All of the main areas include breathtaking views of the spectacular surrounding scenery and large trees surrounding this intimate camp. For a more intimate experience you can choose to dine on individual tables set in special spots around the camp.

Helicopter Safari - Africa from Above