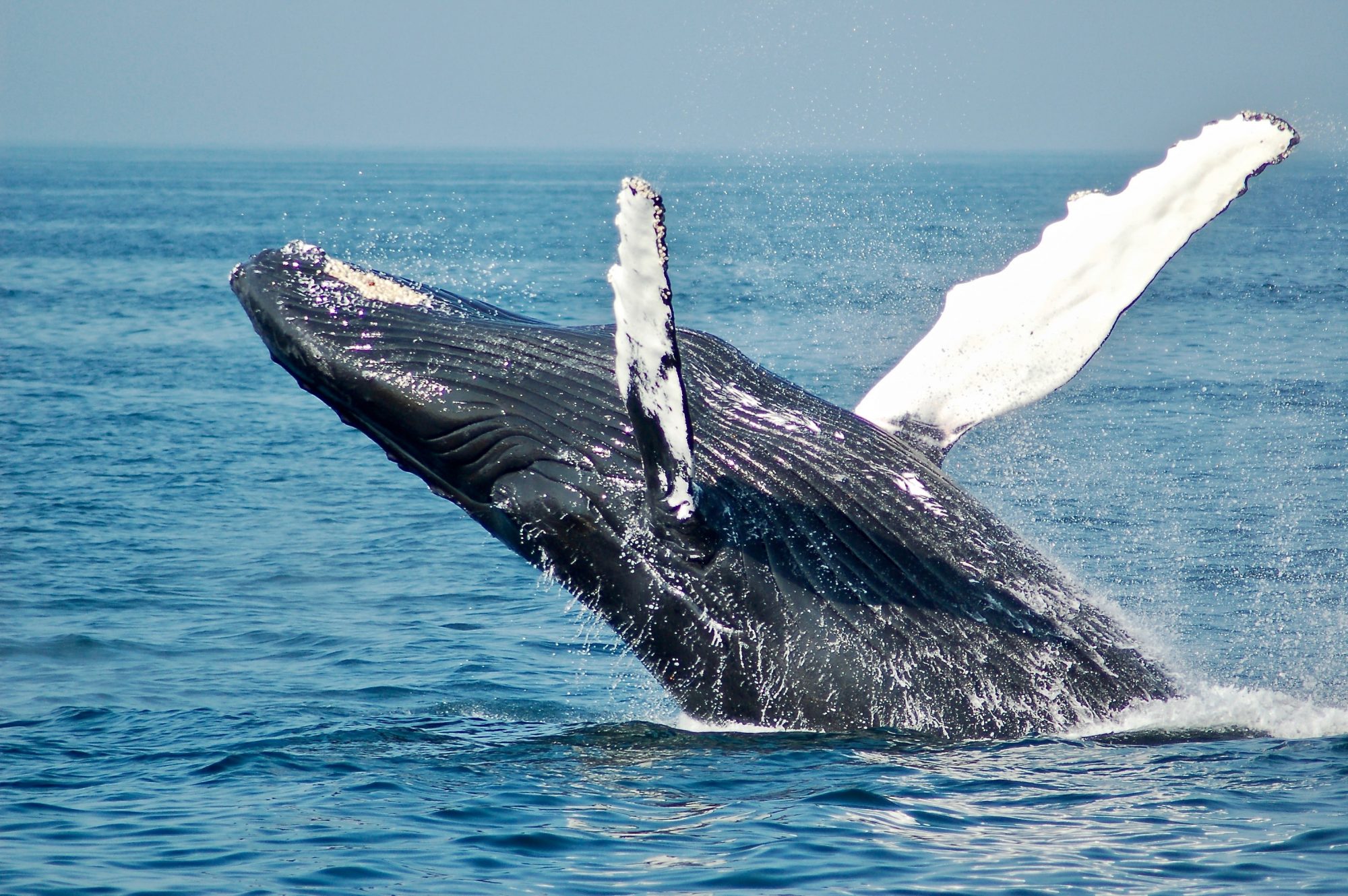 From Sea to Safari: The South African Big 5 Discovery

Embark on a journey to discovery the marine and bush big five.

Immerse yourself in this exceptional 11-day Africa safari and coastal exploration that offers the unforgettable opportunity to witness the safari and marine Big Five. Your journey kicks off in the world-renowned Sabi Sand Game Reserve, famous for its incredible Big Five sightings. Stay at &Beyond Kirkman’s Kamp and embark on twice-daily game drives and interpretive nature walks. Afterwards, journey to South Africa’s Mother City of Cape Town for a wonderful discovery of Table Mountain and the Cape Peninsula, before venturing to the Cape Whale Coast region, the world’s best destination to view the antics of whales. Here, you will have the opportunity to stay in the tranquil surrounds of the Grootbos Private Nature Reserve, which offers a plethora of adventures and an exceptional wine tasting tour of the Hemel-en-Aarde (Heaven on Earth) Wine Route. Next, encounter the marine Big Five on a sensational whale watching trip, followed by an action-packed shark cage diving excursion. In between your ocean adventures you will also have the opportunity to explore your surrounds with various activities such as nature drives, horse riding, hiking, beach trips, cave explorations and quad biking.

Experience Sabi Sand on safari. Delight in phenomenal twice-daily game drives and view iconic wildlife. Take time-out after a successful day of game viewing and head to the pool area, boasting breathtaking views and leopard are often seen here too. Toast the sun as it sets over another magical day in Africa with an artisanal gin, sipped under the shade of a 650 year old fig tree. Enjoy an afternoon of tennis on a court that was originally opened by legendary player, Billy Gene King. Find original antiques scattered around the lodge that have been handed down over the decades, and what give this 1920’s homestead its authentic “Out of Africa” feel. 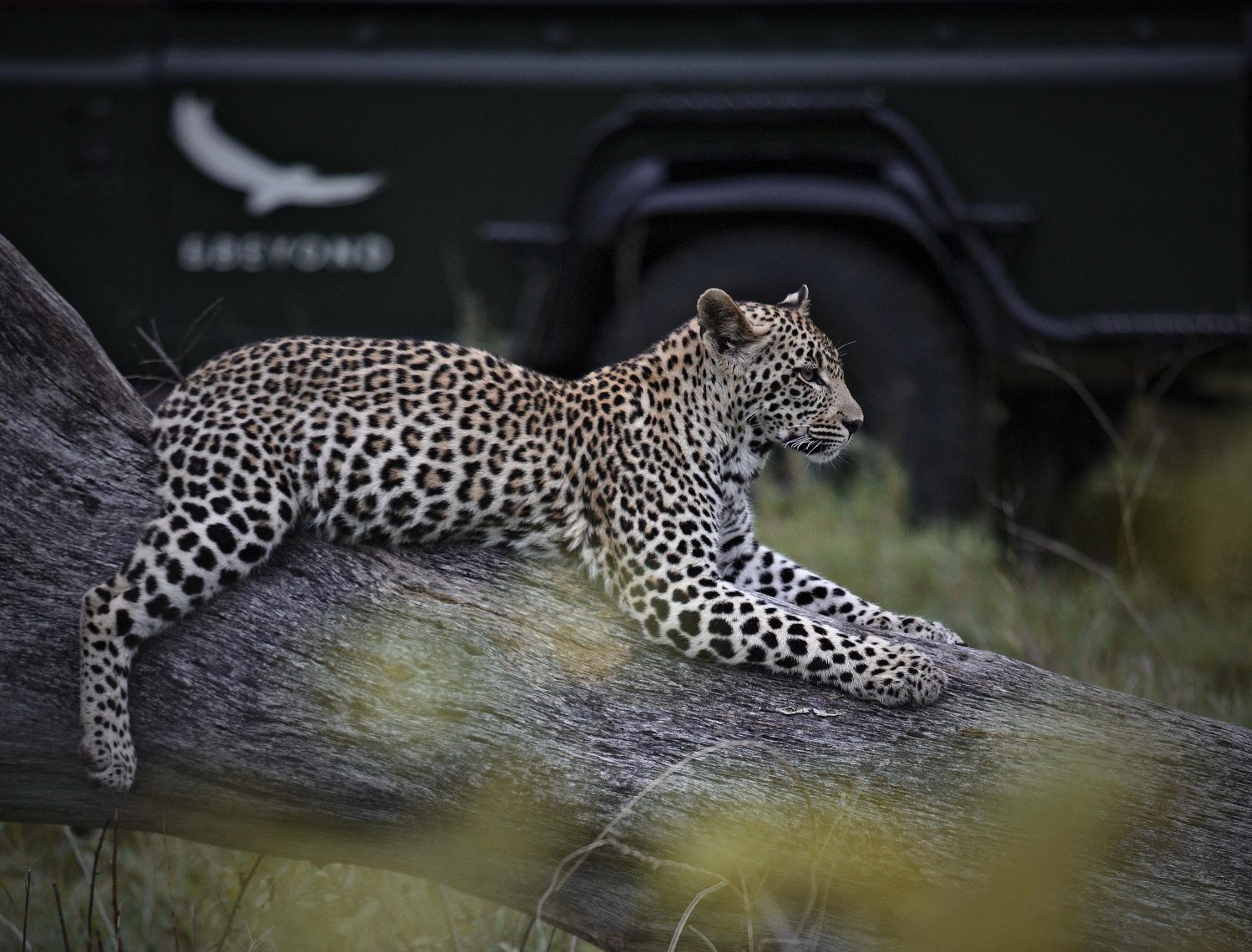 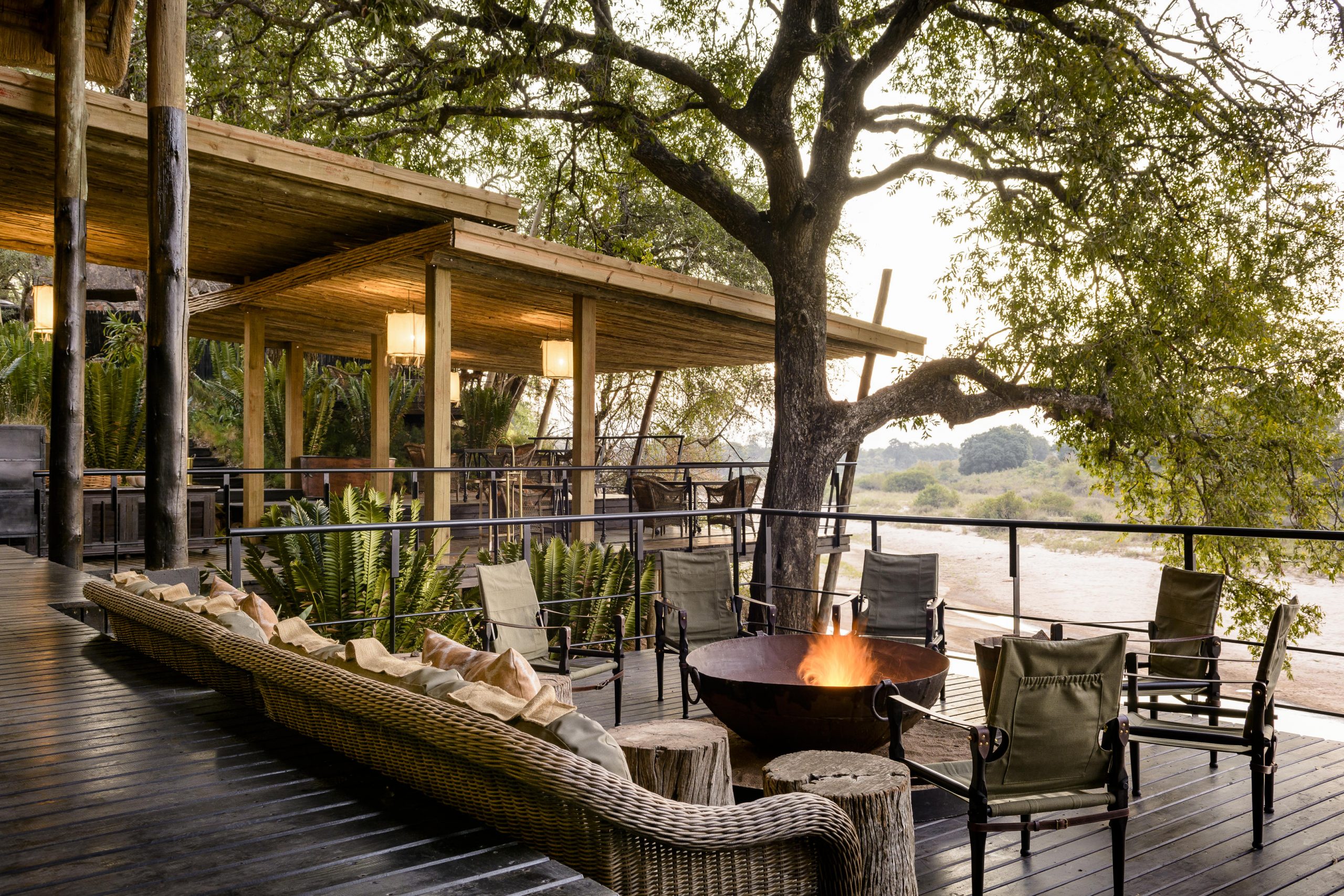 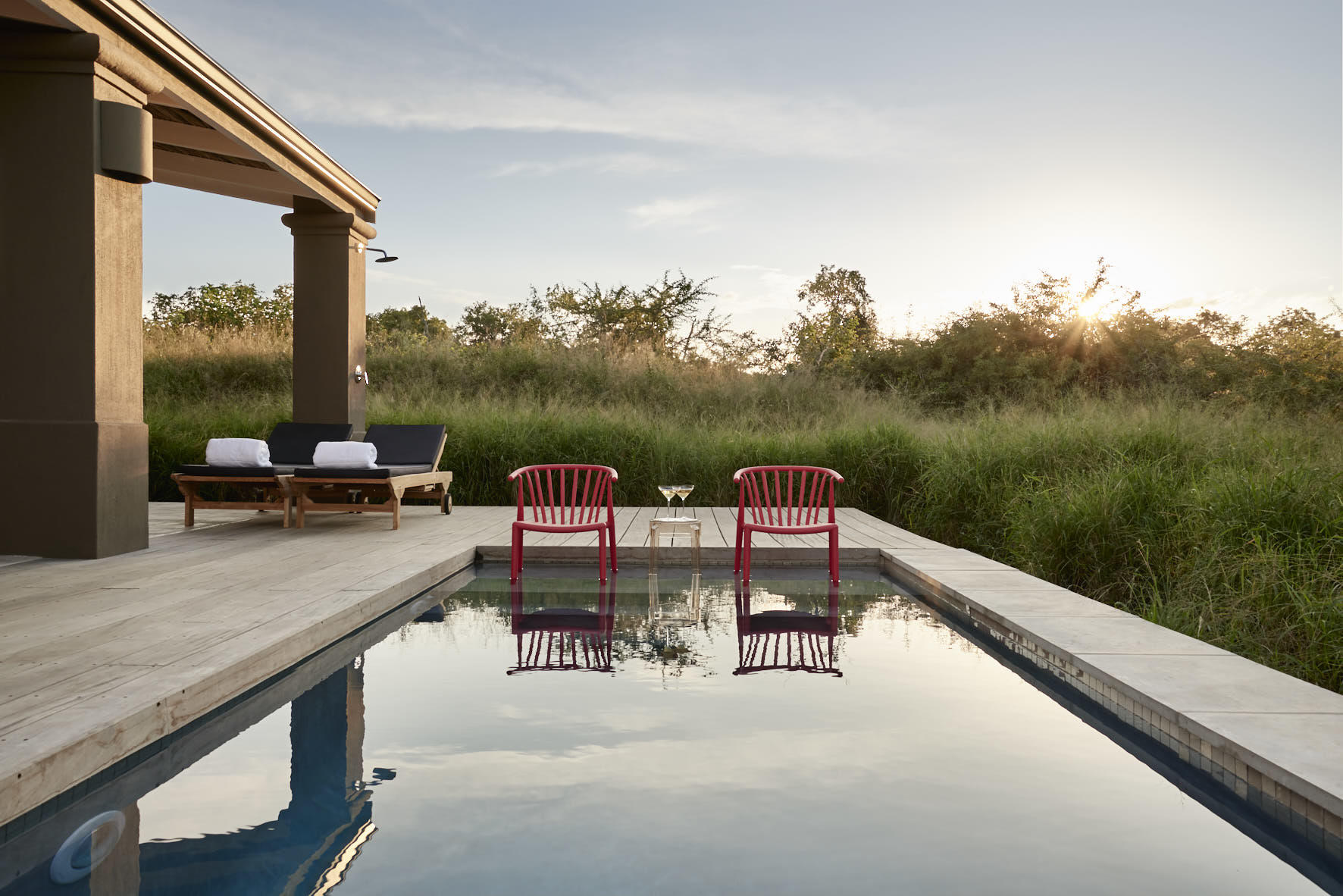 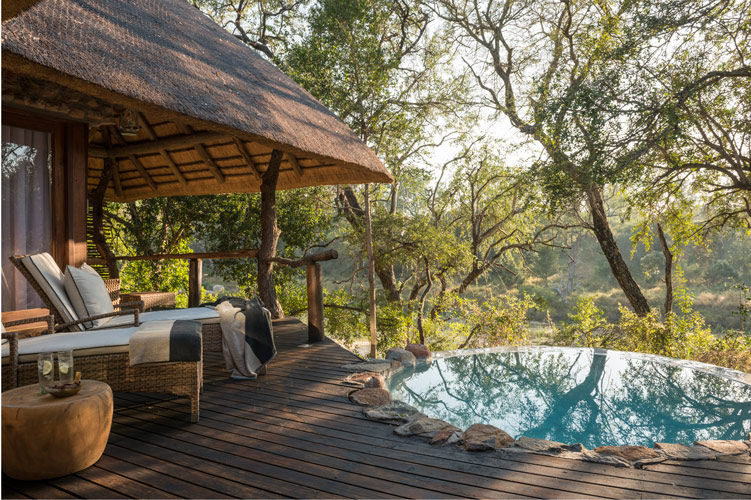 Ebony Lodge has a commanding presence and an essence that evokes an intense feeling of familiarity – as if visiting a congenial family home. Sumptuous coziness is simply the order of the day – tempting you into relaxation and reflection.

The secluded thatched suites are the epitome of elegant comfort, with rooms styled with an eclectic mix of colours, fabrics and textures. A colonial feel with Egyptian linen, African throws, antiques and modern luxuries combine to create a homely, lived-in feel. From the vast wooden deck to the pool overlooking the Sand River, it’s not uncommon to see elephant, buffalo and antelope grazing only metres away at any time of day. Perhaps this is where the notion of an ‘armchair safari’ was perfected…

Six luxurious suites enjoy private pools and magnificent bathrooms while expert rangers and trackers inspire and inform. Every meal is a celebration lingering long in the memory. Feast under the stars, enraptured by the power of the wild.

Under a leafy canopy of ebony trees, six luxurious stone cottages grace the banks of the Mabrak River. As one of only 12 guests, you feel instantly at home in this quiet retreat, where classic interiors enfold guests in quiet style and elegance. Generous private plunge pools and shady decks look out onto the dry riverbed. Large, welcoming sofas and African sculptures fill the gracious guest areas. Dine under the ancient jackalberry tree where skilled chefs serve delicious meals or steal away for an intimate dinner in the well-stocked wine cellar.

Depart Sabi Sands for Cape Town. Enjoy a scenic tour of Cape Town at iconic Table Mountain or, if the weather is not favourable, at the flat-topped mound known as Signal Hill. Browse vibrant Greenmarket Square, one of the city’s oldest markets, and take a walk through Company Gardens, established by Dutch settlers in 1652. Drive past the Houses of Parliament and the historical Castle of Good Hope, as well as the Slave Lodge, which used to house thousands of slaves belonging to the Dutch East India Company. Visit the traditional Malay Quarter in the predominantly Muslim Bo-Kaap, with its brightly coloured houses dating back as far as the 17th century. Pause to listen to the firing of the noonday gun from Signal Hill. 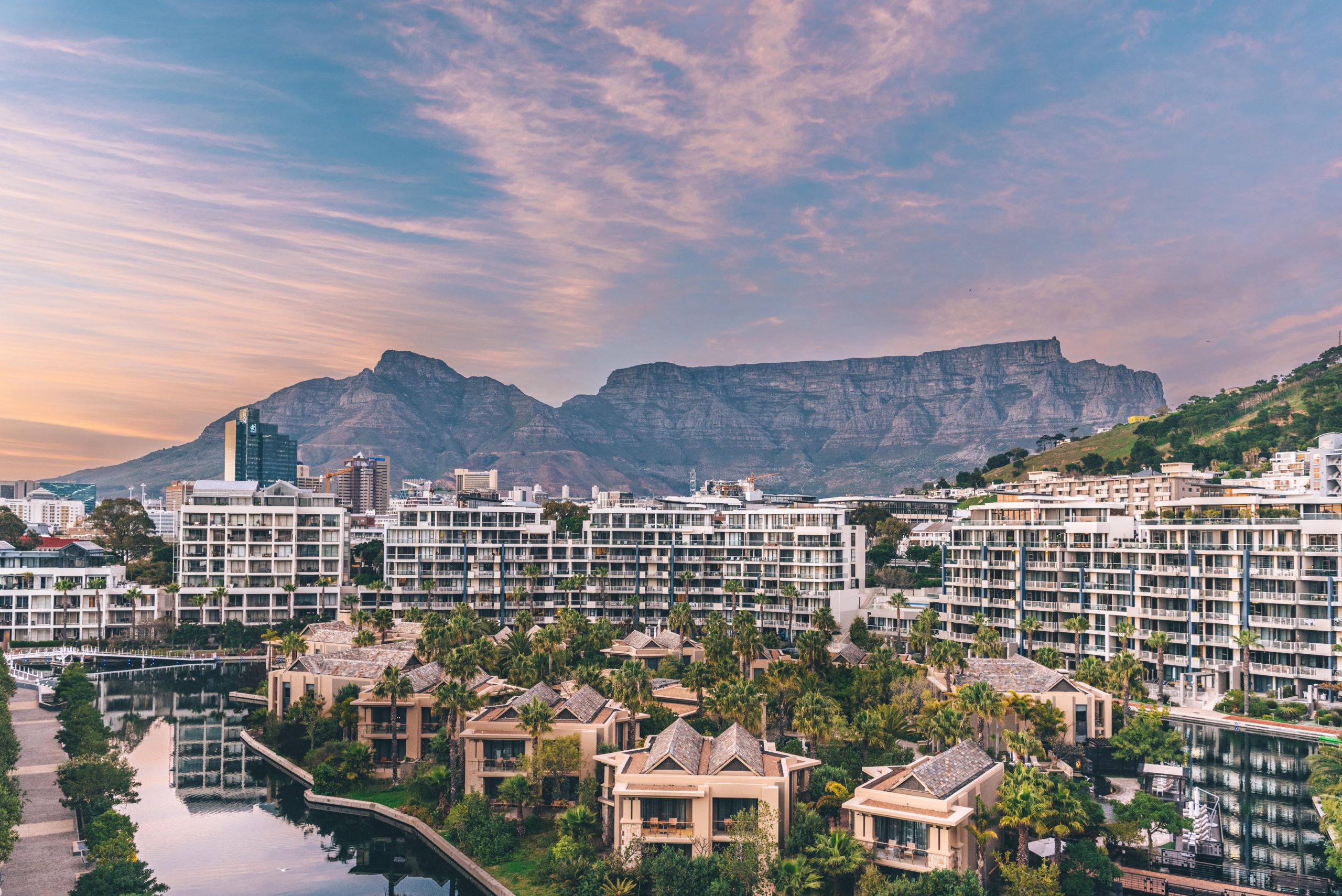 One & Only Cape Town 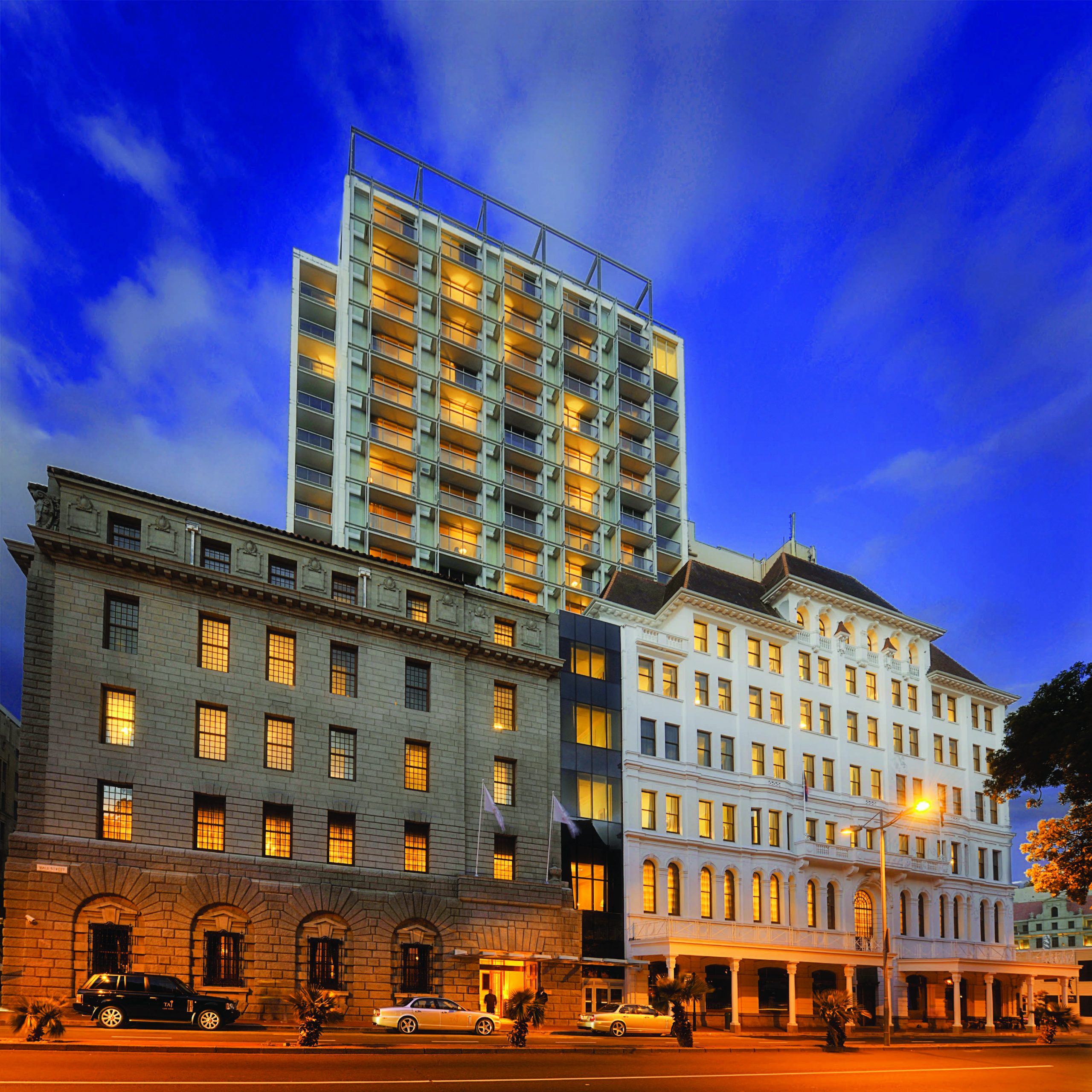 One & Only Cape Town

Set in the vibrant heart of Cape Town’s waterfront, surrounded by restaurants, shopping, art and entertainment; on the doorstep of Table Mountain; and within easy reach of spectacular beaches, national parks, and winelands; One&Only Cape Town is the ultimate curator of discovery, from active adventures, to mindful moments and exclusive, tailored experiences. Through an unrivalled kids programme, magical destination spa, and a selection of the most celebrated vinicultural and dining experiences in the city, the best of South Africa is also brought to you, on resort. Boasting the largest rooms in Cape Town, all with al fresco space, the opportunity to unwind with loved ones brings balance to adventure-filled days, as you bask on idyllic, inner-city islands, or enjoy the vistas of one of the new Wonders of the World from you Marina Rise balcony.

Situated in the historic centre of the city, the Taj Cape Town is a combination of rich history and elegant contemporary architecture. Originally home to the South African Reserve Bank and Temple Chambers, later the Board of Executors (BOE), it successfully combines the heritage of the old with the luxury of the new. This luxury five-star hotel is ideally located in the centre of historic Cape Town at the entrance to the famous pedestrian precinct, St George’s Mall and is perfectly situated for those looking to discover authentic Cape Town; and its blend of fascinating history, exotic culture, soulful art, lively entertainment and delectable cuisine. The historic structure of the Taj Cape Town is home to the Heritage Rooms and Suites, Tower Rooms and Suites, The Presidential Suite and the Taj Club. These 166 exquisite rooms offer guests a blend of sophistication and luxurious comfort.

Depart Cape Town heading towards the seaside towns of Strand and Gordon’s Bay, nestled below the slopes of the Hottentots Holland Mountains, with magnificent views across False Bay to Cape Point in the distance. Continue along the spectacular Marine Drive overlooking this rocky coast, past the white beaches of Koeël Bay and the villages of Rooiels, Pringle Bay and Betty’s Bay. Drive over the Bot River to the charming village of Hermanus, pausing in the picturesque Hemel-en-Arde valley, whose cool, maritime climate favours the growing of pinot noir, sauvignon blanc and chardonnay grapes, found at acclaimed wine estates like Bouchard Finlayson, Hamilton Russell and Whalehaven. Hermanus is known for its abundant sightings of Southern right whales, which come in very close to shore to mate and calve from June to November. There are excellent vantage points from the cliff paths that run from one end of the town to the other. Savour lunch at a popular restaurant in Hermanus, browse the town’s craft markets and then head back to Cape Town via the verdant apple-growing regions of Grabouw and Elgin, with a final stop at the spectacular Sir Lowry’s Mountain Pass for a panoramic view of the Cape Peninsula. Depart on a whale watching trip where whales won’t be the only things you’ll see on this unforgettable two-hour adventure. Your boat will launch in the quaint harbour of Kleinbaai, in Gansbaai, and will make its way toward the Pearly Beach area which is home to the Southern Right Whale. Venture to the renowned Dyer Island for excellent penguin and seabird viewing, and then to Geyser Rock to view the curious antics of Cape Fur Seals. Between these two islands lies the notorious shark alley where you may be fortunate enough to view the spectacular great white shark. Depart on a Shark Cage Dive – This adventure is ideal for thrill-seekers and nature enthusiasts alike. Guests can experience the excitement of being face to face with a shark, inside the protection of a submerged cage. 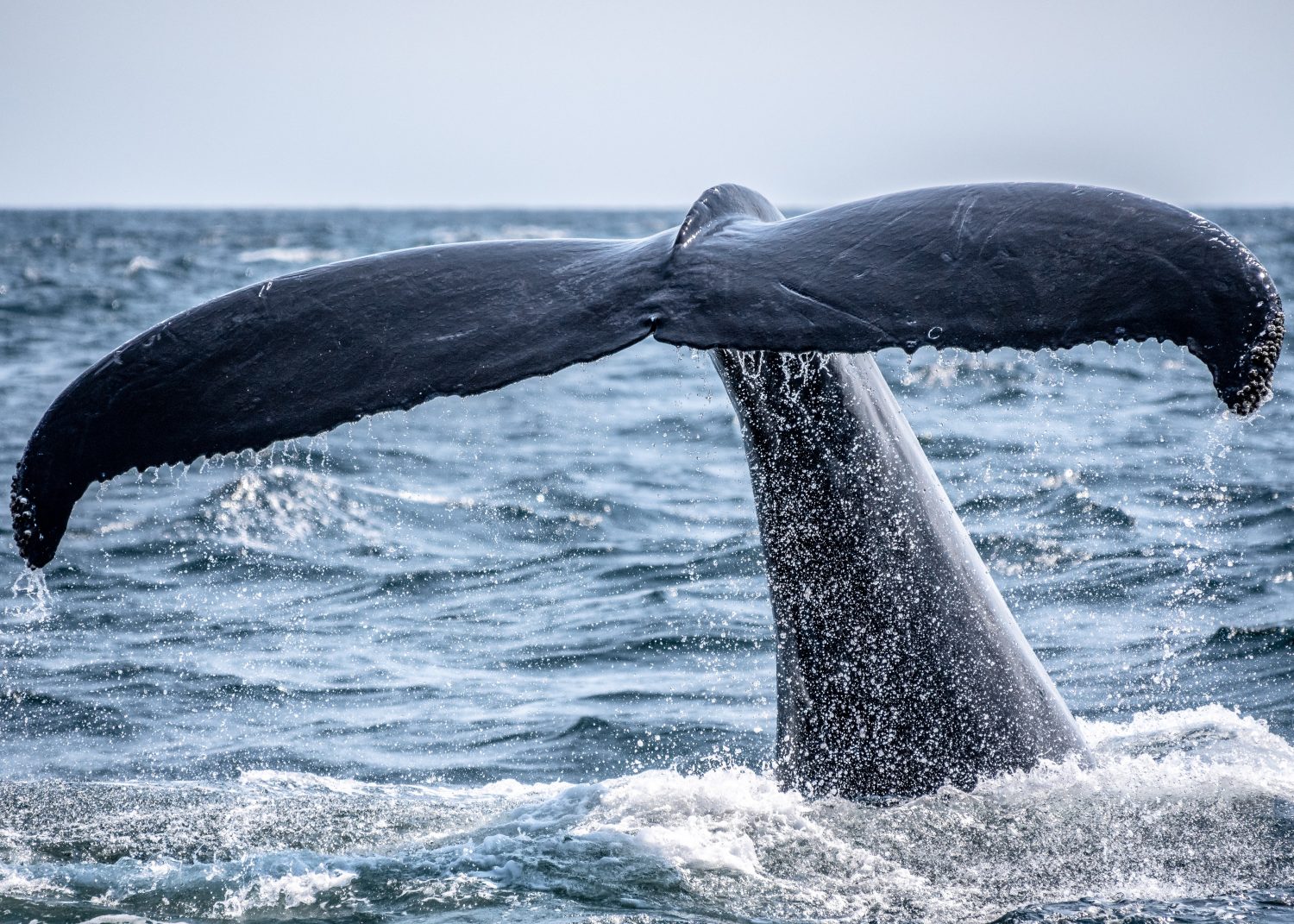 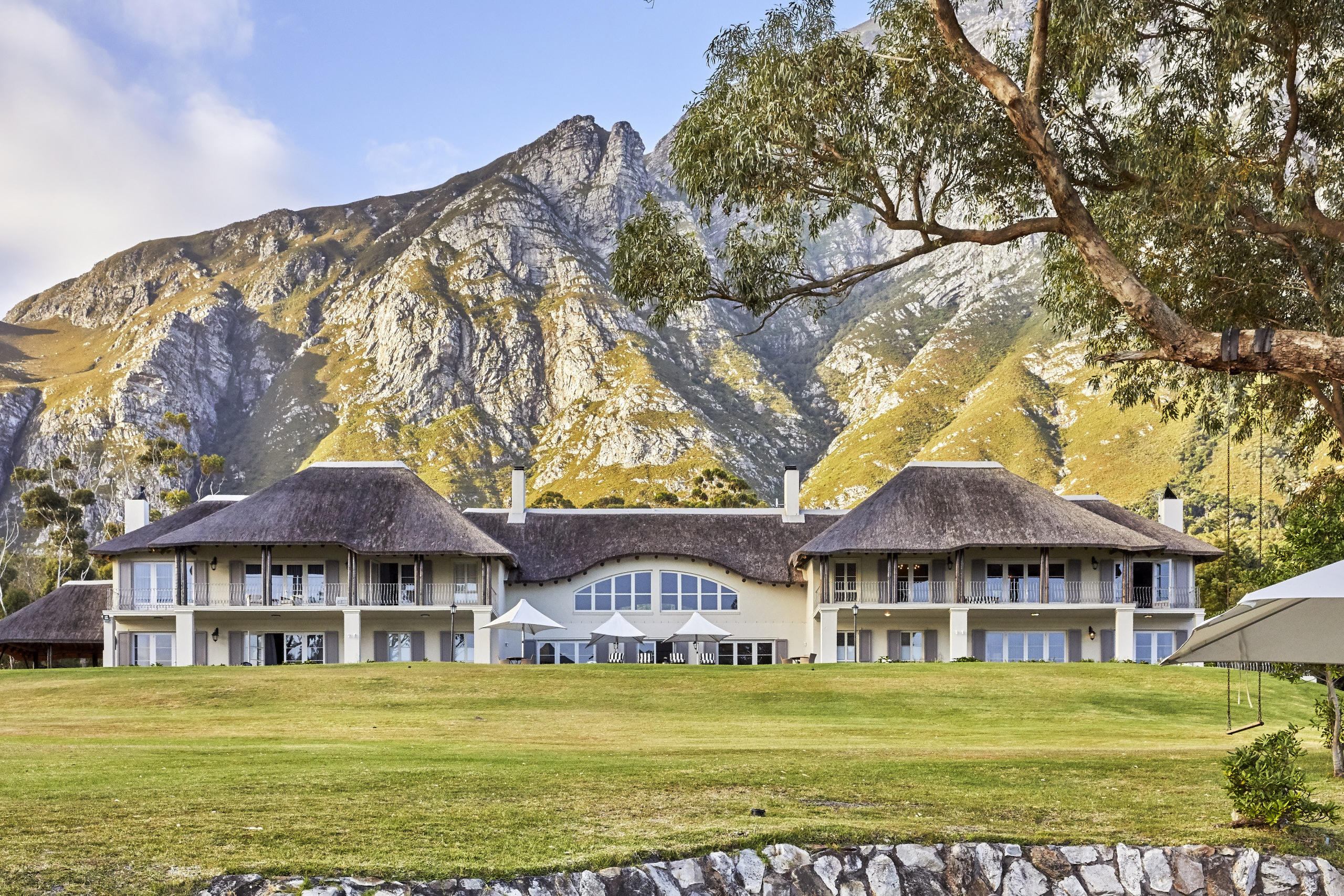 From its stunning clifftop position in the town of Hermanus, Birkenhead House enjoys exhilarating ocean views and close proximity to the beach. Breezy beach house style is mixed with contemporary artwork and opulent furnishings to create an elegant and inviting environment.

Eleven suites with either sea or mountain views offer the height of comfort and luxury: balconies, underfloor heating and huge bathtubs allow guests to make the most of their stay, whatever the weather.
Spa, pool and gym offer the chance for indulgence, relaxation or exercise. Cliff and beach walks are an invigorating way to take the air but numerous sporting and leisure activities are available in the area, from golf to shark-cage diving. Whale watching, for which Hermanus is famed, can be done from the hotel from June to November, with September the height of the season.

After a sundowner overlooking the ocean, the freshest seafood and most delicious international cuisine can be enjoyed. From morning coffee and cake to hot chocolate beside the fire, there is always something delectable on offer.

A luxurious, peaceful escape that offers exceptional cuisine and personalised service nestled outside the serene town of Hermanus, a scenic 90-minute drive from Cape Town.

An exclusive boutique hotel offering tranquility and exclusivity. A luxurious, peaceful escape that offers exceptional cuisine and personalised service nestled outside the serene town of Hermanus, a scenic 90-minute drive from Cape Town. The Thatch House is an exclusive boutique hotel that offers respite from everyday life, in an exquisite natural setting overlooking the Hermanus lagoon. Guests here are treated not only to the expansive views over the water and the ancient Cape Fold Mountains, but to impeccable service and distinctive fine fare.

Offering a refined sense of home, our boutique hotel has six large luxurious suites, in- and outdoor living areas, and lovingly-manicured sprawling gardens that are coupled with our renowned service and facilities. With relaxation a priority for guests, our team is on-hand to assist with even the smallest of arrangements.

Reconnect to the Kenyan Wilderness

Walking with Wild Dogs in Zimbabwe