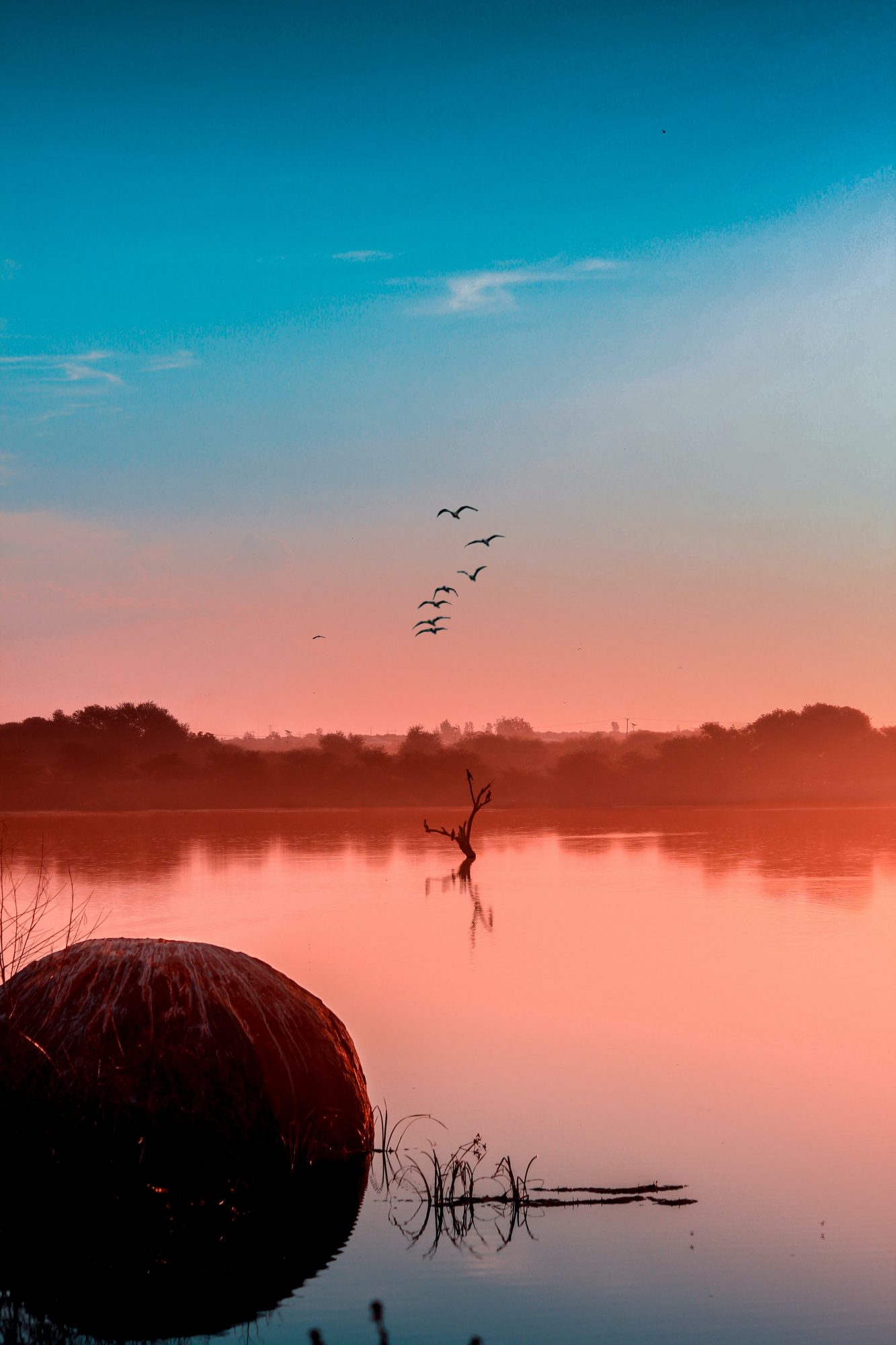 Partake in a true Botswana safari, as you explore the waterways of the Okavango Delta and the bush of the Moremi Game Reserve.

Explore Botswana’s Okavango Delta on this luxury holiday. You will be at one with nature, navigating through the delta’s plethora of waterways and seeking out the Big 5. This tour allows families, couples, and friends alike to truly immerse themselves in the beauty that is Botswana.

Depart Maun for Vumbura Plains North in the Okavango Delta. Situated in the northwestern corner of Botswana, the Okavango Delta is a World Heritage Site as it is the largest inland delta in the world. The magnificent Okavango River sprawls out over the dry sands of the Kalahari Desert forming this flourishing waterlogged oasis featuring countless meandering waterways and crystal clear lagoons studded with water lilies, as well as fertile floodplains and reeded islands inhabited with abundant wildlife. The Okavango Delta stretches over 15000 square kilometres. Visitors can enjoy a number of wonderful activities such as game viewing, fishing, bird watching or taking an authentic guided Mokoro excursion through this wetland paradise in a traditional dugout canoe. Commonly spotted animals include: lion, rhino, leopard, giraffe, hippos, elephants, crocodiles and countless species of bird.

There is no better way of viewing game and exploring the Okavango than by traditional mokoro (dugout canoe). These excursions reveal the fascinating smaller creatures of the Delta including colourful frogs and lively waterbirds. You may also opt to partake in a hot air balloon safari. Take to the skies in style and soar silently over the rich ecosystem of the Okavango Delta in a hot air balloon. Gaze over scenic splendour, watch elephant playing far below and fly eye-to-eye with an eagle. This experience ends with champagne and snacks 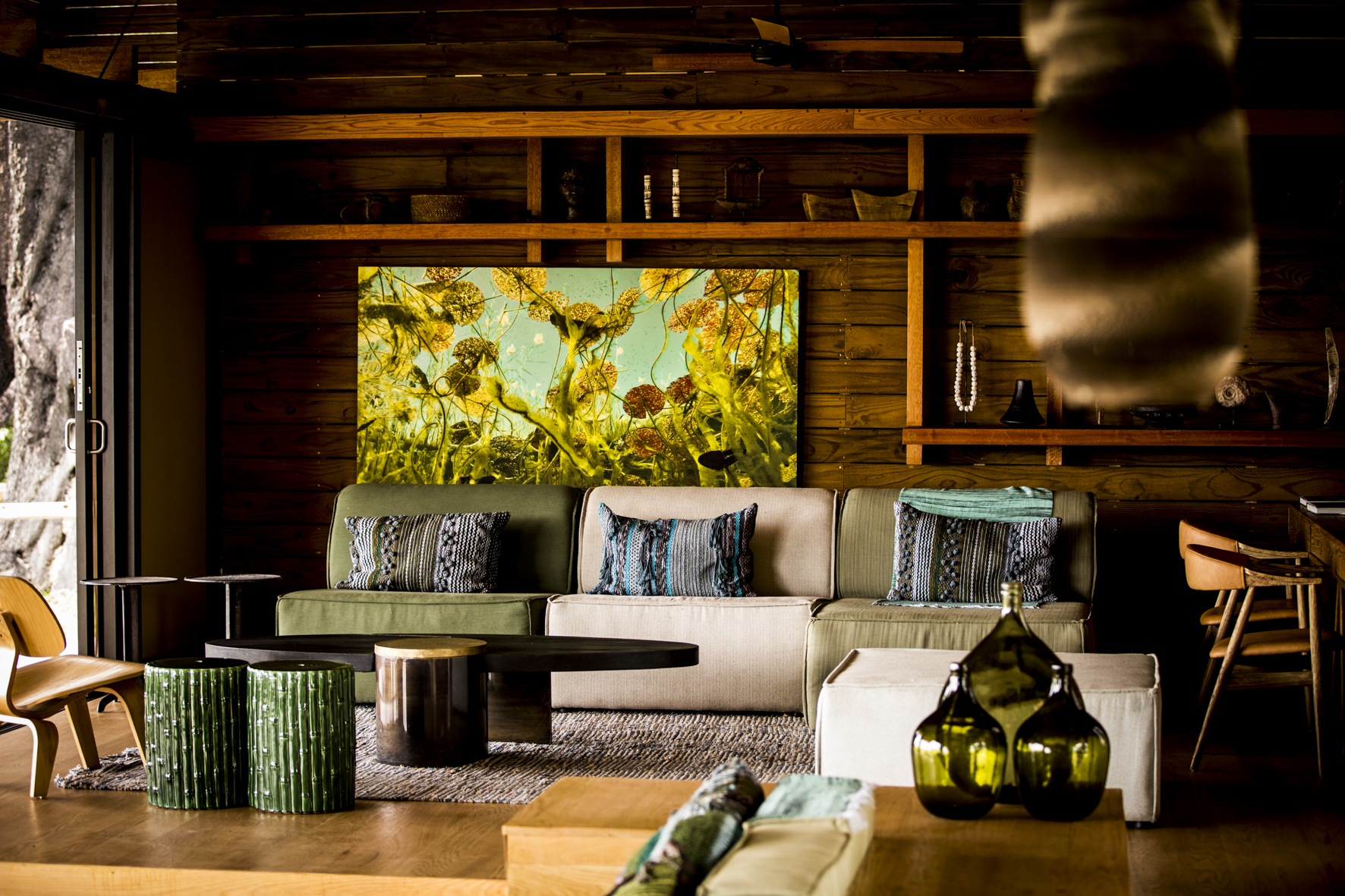 Luxurious Vumbura Plains lies in an area that is a mix of water and dry land. The wildlife is diverse, so that both land and water activities on vehicles, mekoro and boats deliver an all-round African safari experience.

Vumbura Plains comprises two satellite camps, each with its own main area with an expansive vista across the floodplains and furnished with idiosyncratic objets d’art. The 14 tents, raised off the ground, are unique and contemporary in design, with extensive use of light, wood and space. Each includes a sunken lounge, sala, and plunge pool. Each of the two family units have private decks linking the two separate tents.

The concession is leased from five villages through the Okavango Community Trust in a partnership that ensures that the benefits of ecotourism are shared with our neighbouring rural stakeholders.

Flight from Vumbura Plains North to Abu Camp. The Abu concession offers exceptional Okavango Delta game-viewing in a variety of pristine habitats.Game drives in the enormous private concession traverse wonderfully varied landscapes and give you the best opportunities to view and photograph birds, predators, and herds of elephant and buffalo at close quarters. Early mornings and late afternoons are generally the best times to see wildlife, as animals are generally more active when it’s cooler. 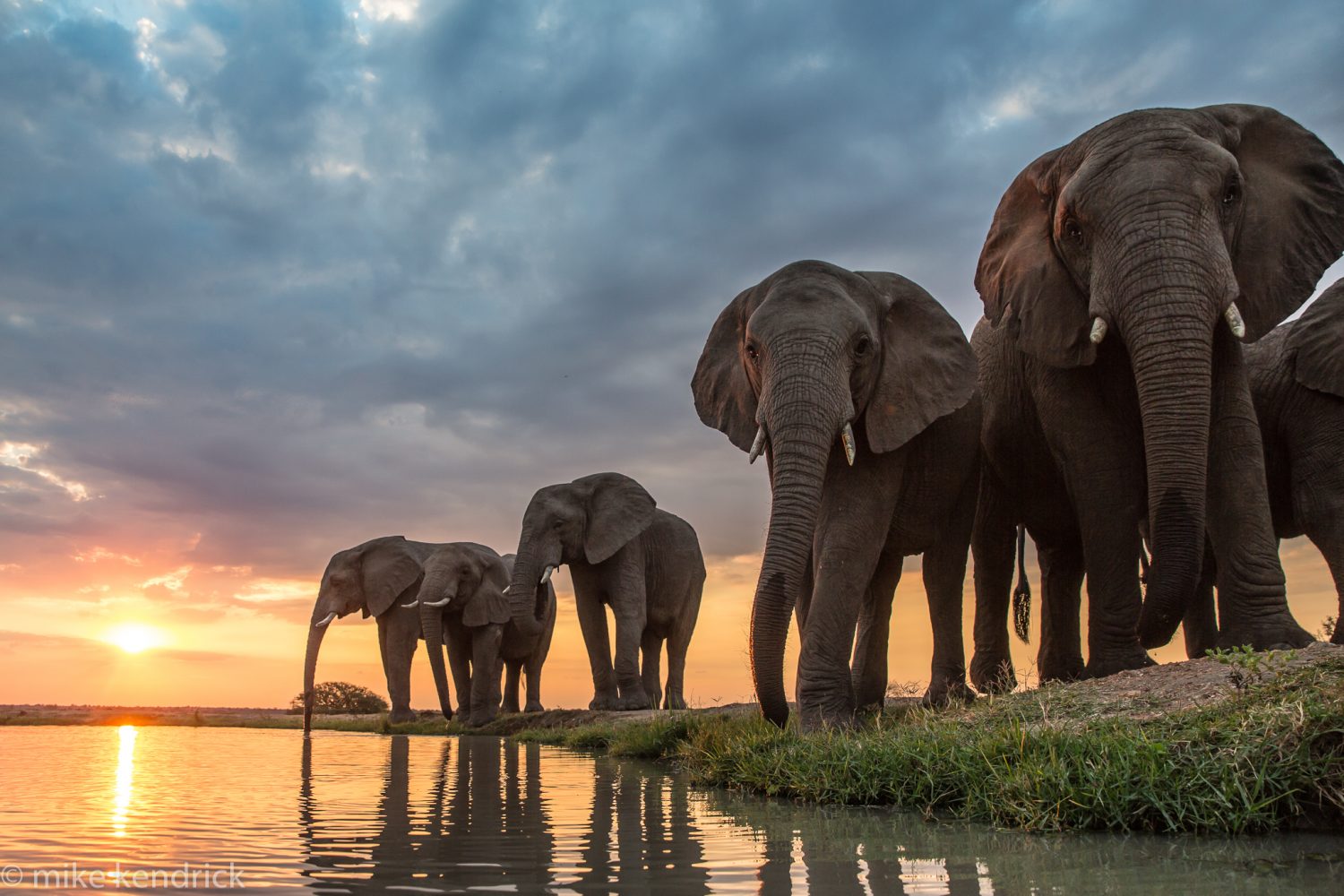 Partake in elephant conservation efforts. The whole premise on which Abu is based is that of elephant conservation. The largest of land mammals is a keystone species and an integral part of Africa’s web of life.The great paradox of elephant conservation is that while many African countries are experiencing rapidly declining elephant populations, others – such as Botswana – must cope with burgeoning numbers. Both declining and growing elephant populations present their own challenges. The Abu Herd members are eloquent ambassadors for elephant conservation, and several elephants have been reintroduced to the wild, where they continue to provide valuable data to local researchers and conservationists. Several of these elephants have remained in the Abu concession, and cause much delight all round when their wanderings bring them close to camp. During your stay, you are invited to become a member of the Abu Herd. At designated places in the concession, you will get to know the personalities of each family member, from playful youngsters to precocious teenagers and doting adults. You will soon form a deep and enduring connection to each elephant – a sense of belonging which is both humbling and uplifting 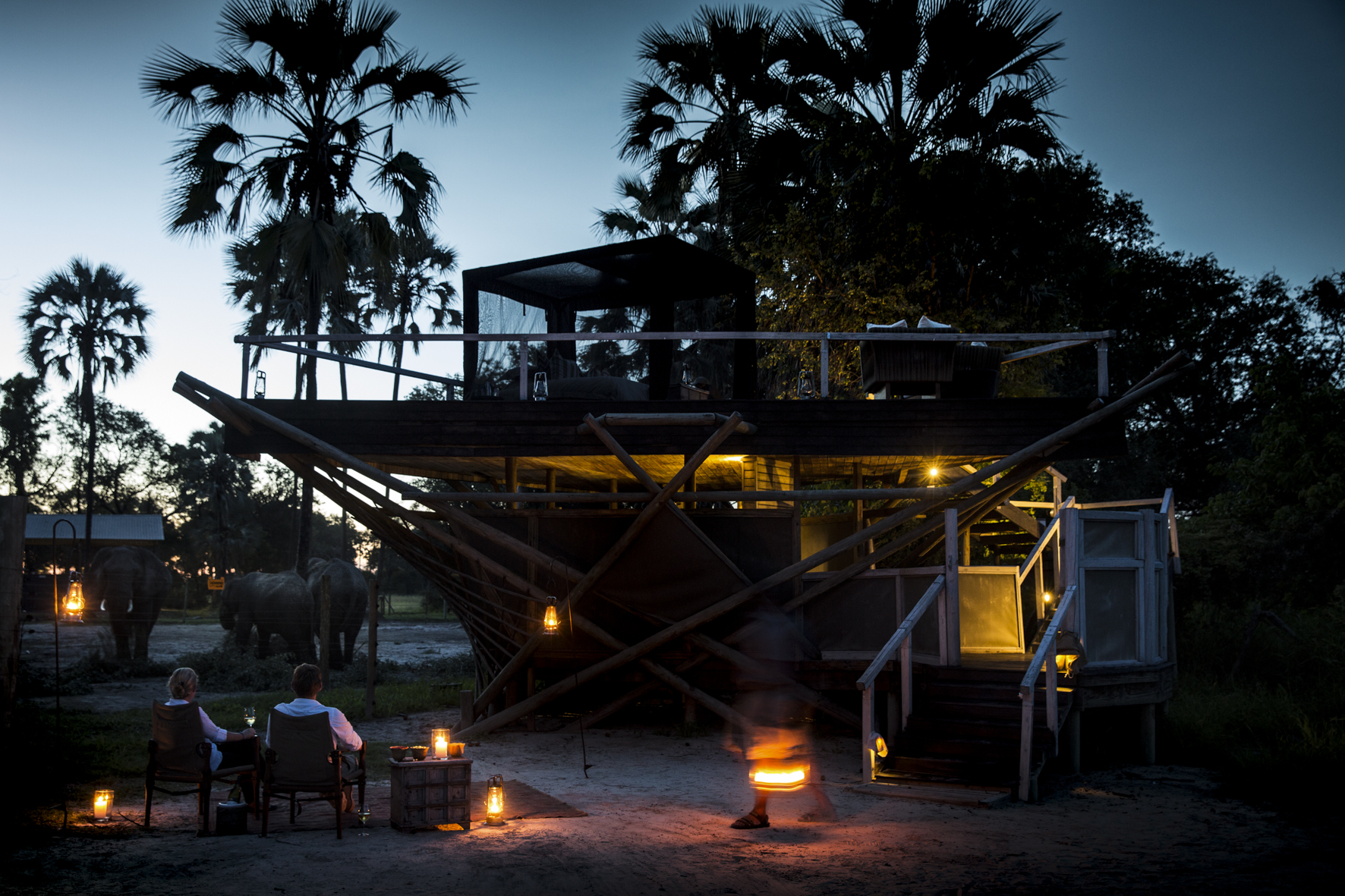 Set in age-old riverine forest, Abu Camp offers the extraordinary privilege of interacting with African elephants: meeting the individuals, walking with them and being part of a herd makes this a unique experience. Game drives, walks (on request) and mokoro trips take in the diversity of game in the area.

Abu’s six luxurious, explorer-style tents blend seamlessly into their natural surroundings. Each has a tree-shaded deck with a private plunge pool overlooking a lagoon. The main area features a well-stocked library and study; there is a gym for the energetic. Abu’s one-of-a-kind Star Bed is set over the Abu Herd’s boma and guests can spend a night here, being lulled to sleep listening to the elephants’ rumbling snores below.

Abu Camp is based on elephant conservation, believing that its elephant herd members help raise awareness about the plight of the species as a whole, and supporting meaningful scientific research projects.

Flight from Abu Camp to Mombo Camp in the Moremi Game Reserve. Situated in the east of the Okavango Delta, Moremi Game Reserve ranks as one of the most beautiful reserves in Africa. It covers more than 4871 square kilometres of pristine wilderness, and the varied terrain includes savannah, winding waterways, and dense forest. This diverse ecosystem supports an incredibly wide spectrum of wildlife, ranging from large herds of buffalo, wildebeest and zebra, to the rare sitatunga and lechwe antelope, lion, cheetah and packs of wild dog in the open grasslands. The birdlife is prolific and includes most of the 550 bird species recorded on Botswana’s national bird list. A range of luxury lodges in the reserve offers visitors the perfect base to experience this corner of paradise. 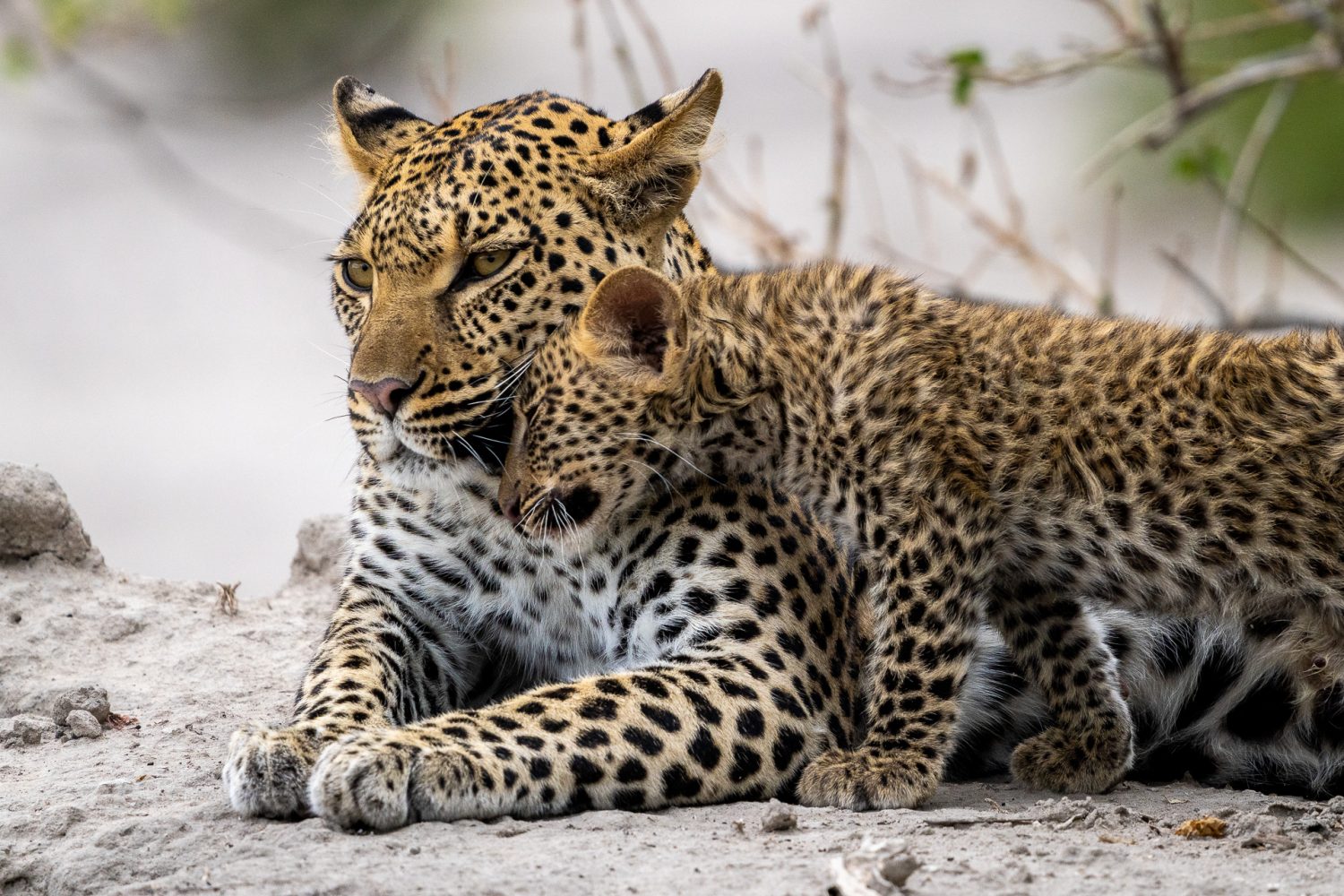 The Mombo Concession, home to Mombo, Mombo Trails, and Little Mombo, sits on the North Eastern tip of Chiefs Island inside the Moremi Game Reserve, the centre of the Okavango Delta. Often referred to as the predator capital of Africa, the Mombo Concession hosts phenomenal concentrations of Africa’s famous ‘Big Five’ in one of the most beautiful parts of Africa. Lilly scattered flood plains and palm fringed islands surround both camps as the crystal clear waters of the Okavango attract a remarkable diversity of African wildlife. The game viewing here is well regarded as some of the finest in Africa. Game surrounds camp at all times of the year with the Mombo concession being one of the very few places in Africa to provide world class game viewing throughout all the seasons. The leopard and lion viewing especially is nothing short of exceptional. Despite Mombo Camp being inside the Moremi Game Reserve where night drives are not allowed, the game viewing is exceptionally good, so good that you don’t even need to leave the camp to see something spectacular. 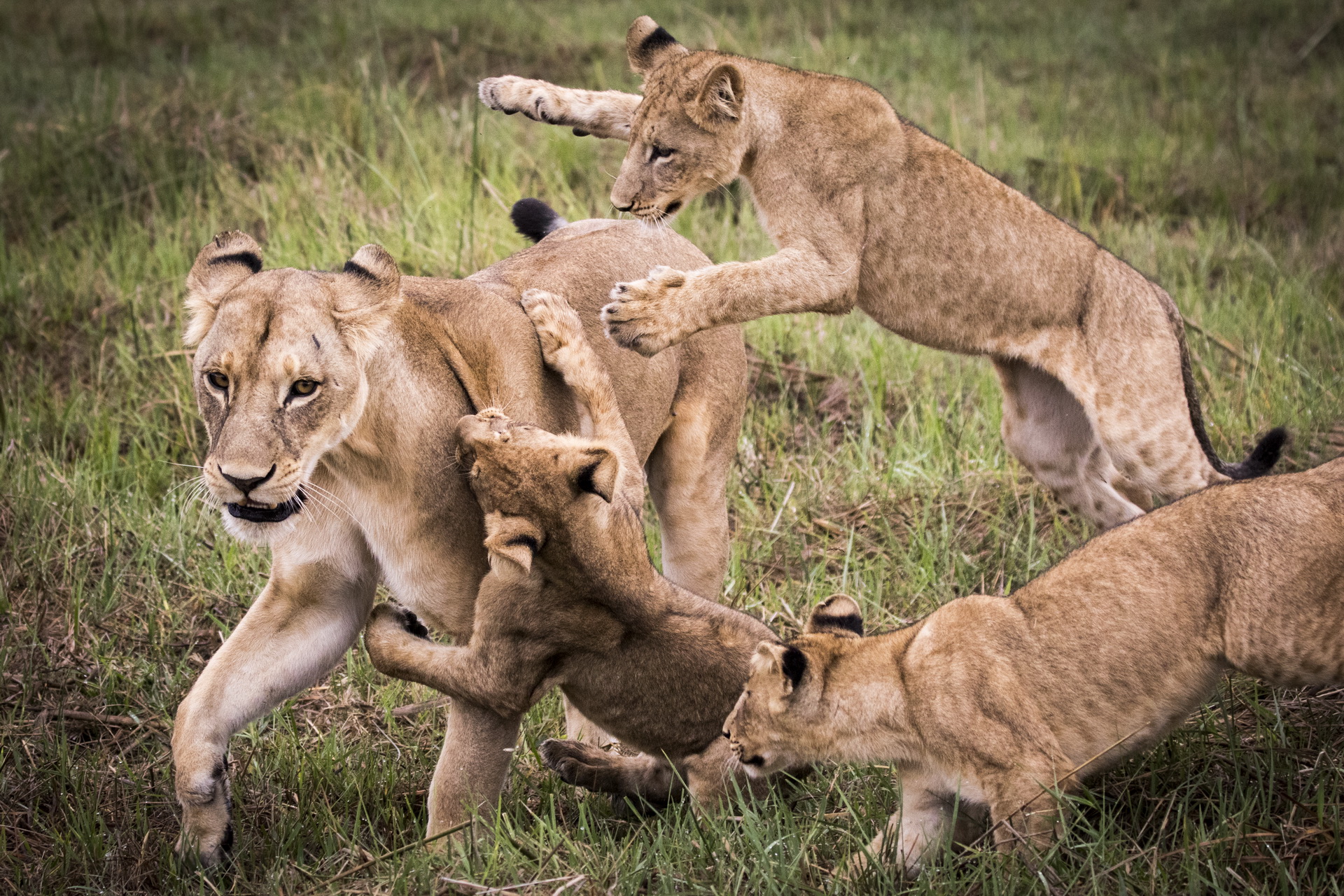 Located just off the northern tip of Chief’s Island, the largest landmass in the Okavango, Mombo is considered the most fertile area in the Delta, with its mix of habitats attracting large herds followed by numbers and varieties of predators.

Rebuilt in 2018, our flagship camp maintains the integrity of its pristine environment through the use of natural materials, minimal human footprint and 100% solar status. Elevated on wooden decks beneath towering shade trees, Mombo overlooks a floodplain teeming with game. Elegant, expansive guest tents celebrate the history and traditions of the camp, while a large deck and plunge pool are ideal vantage points from which to observe the passing wildlife.

Since 2001, Mombo has been the centre of a unique partnership between Wilderness Safaris and the Botswana Government in a pioneering rhino conservation programme that has seen healthy breeding populations of both Critically Endangered black rhino and Near Threatened white rhino reintroduced to and living in the Okavango Delta.

An African Journey through a Photographer’s Lens